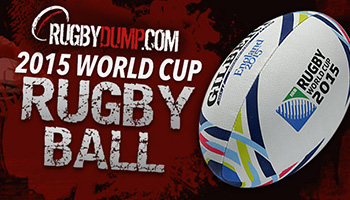 3 winners will win a limited edition World Cup Rugby Ball. Simply hit any or all of the action items below to enter. in Rugbydump Polls & Contests on LockerDome

We’re giving away three official Rugby World Cup 2015 balls, in conjunction with our friends at Lockerdome. To enter all you need to do is hit ENTER above and then use one of the offered methods to stand a chance of winning. Good Luck!