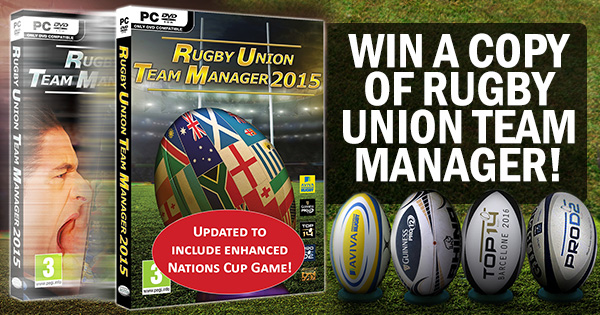 The highly impressive Rugby Union Team Manager 2015 has recently been updated for 2016, as well as now including a special additional game, “The Nations Cup”. Today we’re giving away some copies, so hit enter below to be in with a chance of winning.

Rugby Union Team Manager 2015 includes all the licensed teams from The Aviva Premiership, The PRO12, The Top 14 and the ProD2, all now updated for the 2015/2016 rugby season.

It is the most comprehensive rugby management game ever created, allowing you to immerse yourself in the dynamic world of Rugby management. Battle your way through season after season; securing success both on and off the field.

The game features the biggest licensed competitions from across the world, over 14,500 players and over 320 playable teams.

Always keeping you in complete control, Rugby Union Team Manager 2015, not only puts you in charge of the team, but an entire club. From youth development through to the first team, the players, coaches, physios, scouts and doctors – you’re in charge of everything.

•    Officially licensed by the world’s biggest leagues and competitions
•    320 of the biggest teams in Rugby Union with over 14,500 players.
•    Full 2D and 3D match engines with real-time interaction with your team
•    Internationals including World tournaments.
•    Representative Tours
•    Special Extra  Nations Cup Game
•    Updated for the 2015/2016 Rugby season.