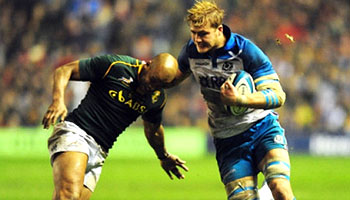 Springbok winger JP Pietersen marked his 50th Test by finishing off a fantastic try and making a thumping hit on Scotland number eight Dave Denton. Pietersen then got a bit overzealous and rubbed Denton’s face in the dirt, quite literally.

Some fans and pundits weren’t amused by what he did, saying it was unsportsmanlike and a bit dirty. Others viewed it as simply a bit of gamesmanship, questioning why some are so sensitive in a sport that fundimentally involves getting the better of your opponents physically.

The tackle itself was perfect. It was a rare chance for Scotland but Pietersen ushered Denton towards the touchline then went in and smashed him. It wasn’t the first knock the South African schooled Scotland number eight took, as Fourie Du Preez also levelled him earlier in the game.

To Denton’s credit, in both cases he wasn’t entirely balanced and was there for the taking, and in terms of getting his face shoved into the ground, his non-reaction showed class.

If anything Pietersen let himself down a bit by doing that, a bit like Delon Armitage and George North did when they wagged their fingers at hapless defenders. It’s not ideal and crosses the line a little, but the players themelves are aware that the excitement of the moment got the better of them.

The Springboks will be looking for more dominant tackles and performances when they take on France in Paris on Saturday night. They haven’t beaten the French in away since 1997, when they won 52-10. The last time the two sides met, in Cape Town in 2010, South Africa won 42-17.

The home side are coming off a solid performance against the All Blacks, where they impressed by nearly sneaking a draw, so will probably fancy their chances of springing an upset.

What was your reaction to the tackle and ‘afters’ from JP Pietersen?