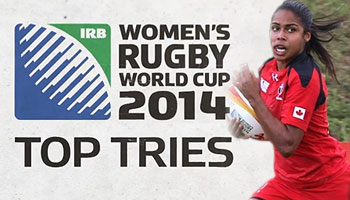 The Women’s Rugby World Cup 2014 kicked off in France on Friday, with defending champions New Zealand winning their opening match, and the home team pulling in a record TV audience. View all the match highlights plus the best tries from day one.

All 12 sides played their tournament openers on Friday, with wins for New Zealand, France, Canada, Ireland, Australia and England. Over a million people tuned in to watch the hosts beat Wales 26-0 in the last match of the opening day.

“One player that stood out for me was Magali Harvey of Canada. She had such pace that Spain couldn’t deal with it, although Spain were supposed to be the quicker of the two sides, with a lot of their girls playing in the Sevens programme.

“So many of these girls have Sevens experience that we’re seeing real gas. You get them into space and some of these wingers are really standing out.” said Evans.

The next day of play takes place tomorrow, Tuesday 5 August. The fixtures are; USA vs Kazakhstan, Australia vs Wales, England vs Spain, Canada vs Samoa, New Zealand vs Ireland and France vs South Africa.

Below are the Top Five Tries scored on day one, including one of those from Harvey, but you can also view all the highlights from all six matches on the next page of this post, page two.

Defending champions New Zealand opened the tournament in style with a comprehensive 79-5 win over a plucky Kazakhstan. The Black Ferns enjoyed an impressive 13 trips over the whitewash, their first after only two minutes, to rack up the highest score of the day.

But Kazakhstan failed to go down without a fight, managing a try in the 62nd minute to scenes of elation among the squad.

Canada secured four tries that earned them a winning bonus point with an impressive display against the Spanish on #WRWC2014 day one. The day belonged to wing Magali Harvey, who scored 26 of Canada’s points in the Parisian sunshine.

Rocio Garcia was the only Spanish scorer, converting her own try after 38 minutes.

Australia withstood a strong South African side to run out winners in the opening game in Marcoussis on Friday. Fresh from a strong performance during this season’s IRB Women’s Sevens World Series, Australia’s Sharni Williams brought her skills to the fifteens game, opening the scoring for the Wallaroos after just two minutes.

South Africa continued to apply pressure but the Australian backs were on top form, and tries from kicker Ashleigh Hewson as well as Tricia Brown put the game beyond the South Africans.

Ireland and USA was the closest match of the day with fans at Marcoussis on the edge of their seats until the final whistle. Ireland opened the scoring with a penalty but let the Americans in for a try after six minutes which set the tone for the rest of the match.

Niamh Briggs was the stand-out player in green, adding a try to her kicks at goal to keep the Irish ahead for most of the second half. Despite relentless pressure from the USA, Ireland had most of the possession and territory in the second period to ensure a crucial win ahead of their clash with defending champions New Zealand in the next round.

England coach Gary Street was happy with the performance of his charges on the opening day. Despite a strong start by the Pacific Islanders, they were outclassed in many areas around the field and an early red card to their full back Soteria Pulumu didn’t help the Samoan cause.

“Obviously we were very pleased with the result, and I’ll take a score of 65-3 every day of the week,” said Street after the match.

“We did simple things well. There were a few errors but it’s only to be expected in the first match of the tournament.”

A raucous home crowd welcomed Les Bleues to pitch one at Marcoussis on Friday evening as the hosts opened the tournament in style on what was a stunning occasion in the Parisian suburb.

The Welsh held their own despite the partisan support in the French capital. The match remained scoreless until the 25th minute when Marion Lievre intercepted a Welsh pass deep in her own half and outpaced the opposition to dot down, much to the delight of the home fans.

Wales have faced France on many occasions during the Six Nations, and their experience meant that the French did not have their own way for much of the encounter, but tries, including one from French stalwart Sandrine Agricole, helped them to a 26-0 victory in the last match of the day.

– Credit to the IRB for official highlights & match write-ups