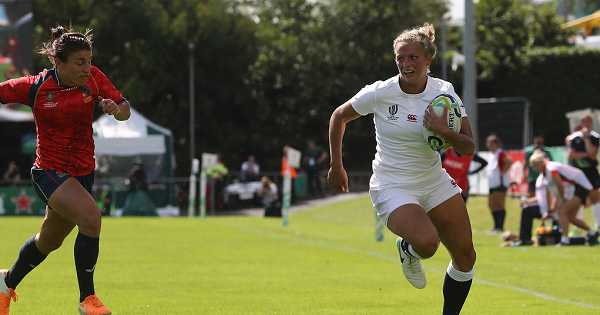 The Women’s Rugby World Cup began in earnest on Wednesday with defending champions England cementing their status as favourites with a comfortable win over Spain while hosts Ireland downed Australia in a nail-biting finish in Dublin.

On paper it was always going to be an easy win for England. The Number 1 ranked side signalled their intent by building an early 19-0 lead. After scoring a staggering seven tries against Scotland in the 6 Nations earlier in the year, Kay Wilson streaked over for another four against a Spanish outfit that just couldn’t match the skills and relentlessness of England.

Coach Simon Middleton rested several key players, with Emily Scarratt on the bench and Amy Wilson-Hardy out of the 23. Scarratt scored a try late on but missed her last two conversions which would have taken the English to 60.

A hat-trick for full-back Selica Winlata helped New Zealand power past Wales in the second match of the day. From the off it was clear that the Black Ferns had turned up as they raced to a 20-0 half-time lead courtesy of further tries from Renee Wickliffe (a double) and Stacey Waaka.

It took Wales until the 62nd minute to score their first points of the game, a try from Sioned Harries subsequently converted by Elinor Snowsill. They got a second through Melissa Clay but Winlata rounded off the match in style with New Zealand’s eighth try four minutes from time.

The USA prevailed in a typically hard-fought encounter after a key break-through try from Kris Thomas shortly after the break. Italy had reduced a 12 point deficit to trail by just five at half-time but Thomas’ score opened the floodgates for the USA to stretch their legs.

A further try from Abby Gustatis increased the gap to 17 points, making Elisa Giordano’s score in the final minute but a consolation.

It was a tough maiden World Cup appearance for Hong Kong even before the teams graced the Dublin turf. The challenge facing the rank underdogs was made impossible after nigh-on 20 minutes of play as the Canadians scored more than a point-per-minute at the half-hour mark.

The Canucks were merciless and the tries kept on coming. Not even a yellow card for Olivia DeMerchant was enough to allow Hong Kong to score any points. The scoreline of 98-0 was a statement of intent from Canada and one which may make others take notice in the latter stages.

Makiko Tomito’s red card for a dangerous tackle with 11 minutes to go marred what was in effect a warm-up game for the French ahead of their next encounter with Australia on Saturday. The game was already easily won by this time thanks to tries from Caroline Landagnous, Montserrat Amedee, Caroline Boujard, Romane Menager, Annaëlle Deshayes and Élodie Guiglion.

Menager in particular scored a superb solo try although the ease of which the full-back managed to make the line probably said as much about France’s attack as Japan’s at-times woeful defending.

By far the pick of the opening day’s games. Two very similar teams in terms of out-right performance, this match was always going to be a tight one and it proved to be. The home side withstood pretty ferocious Aussie attacks before sniping for the opening try of the game courtesy of scrum-half Larissa Muldoon.

The Wallabies responded brilliantly and scored a scorcher through Mahalia Murphy before the break. Shannon Parry and Ciara Griffin traded tries before Sophie Spence crossed in the corner for Ireland’s third try.

Australia fought back with one final effort via Hilisha Samoa but could find a way through for the winning score.

The next round of action takes place on Sunday at 12:00 in Dublin, with kick-off between New Zealand and Hong Kong starting the day. Five more matches follow that, with England vs Italy, USA vs Spain, Canada vs Wales, hosts Ireland vs Japan, and France vs Australia.