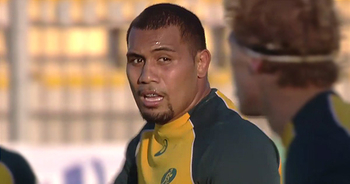 As we near the end of another great year for rugby, here is a look at a monstrous hit that occurred back in June during the World Rugby U20 Championship, when Australian Lolo Fakaosilea lined up Jonathan Faauli and absolutely smashed the Samoan centre.

Twelve points down and half an hour left to play, Samoa were looking for a way back in to the match but backrow Fakaosilea had other ideas and his big tackle forced a penalty for his side when the Samoans were in a dangerous position.

Australia went on to win the pool game 34-22 before finishing fifth after beating Wales.

The commentators started comparing the 20-year-old Australian to legendary Samoan hitman Brian Lima, but we won’t go that far just yet.

It was a great tackle however, and slightly ironic that it was a Samoan on the receiving end.

Fakaosilea comes from good rugby stock though, with his father having played for the Auckland Blues, and his uncle being none other than the late great, Jonah Lomu.