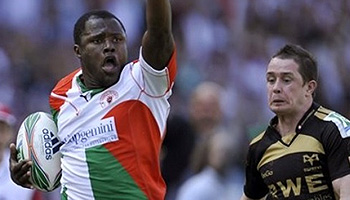 Biarritz progressed to the Semi Finals of the Heineken Cup in a closely contested quarter final with Ospreys earlier today. The French, playing in San Sebastian, won the game 29-28 as a late drop kick from Dan Biggar went wide.

Ten points from the boot of Dimitri Yachvili, three drop goals from Damien Traille, and a try each from Zee Ngwenya and Iain Balshaw ultimately proved the difference for Biarritz in this fiercely contested and entertaining game in the Spanish sunshine.

Ospreys scored three tries of their own with Ryan Jones, Lee Byrne, and Nikki Walker all crossing to score while Biggar kicked 13 points. The match ended a bit controversially as it looked as though the ref had given a penalty to Ospreys, but instead ruled a knock on.

Ngwenya, the Zimbabwean born USA flyer, scored this sensational try as he gassed Mike Phillips and Shane Williams while it looked like both players were waiting for him to cut back inside. As weve seen before though, give Ngwenya space at your own peril.

Biarritzs narrow in now sets them up to play either that of Munster or Northampton, who are playing currently in their quarter final. Leinster already qualified for the semi finals as they beat Clermont last night, with the same scoreline as this match 29-28.

More highlights and clips will follow over the next few days. Please get in touch if youd like anything specific, or post a request on the forum.