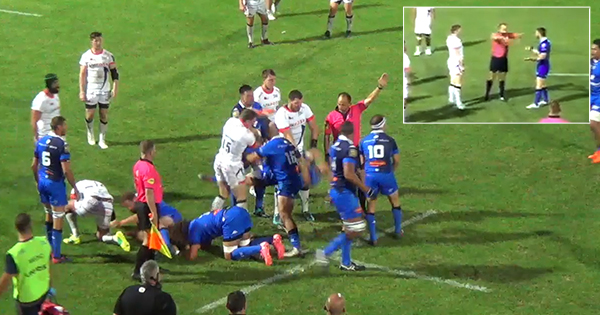 Chris Ashton’s sending off made headlines this week, initially thought to be for a punch, but yesterday was confirmed as a dangerous tip-tackle by the RFU. Here, we’ve mashed together different angles of the incident, giving you a closer look at what happened.

Playing fullback for Sale Sharks in a pre-season fixture against Castres, Ashton took a Rory Kockott high ball before being sacked and taken to ground. With pressure on him, he turned the wrong way and Castres forwards, along with Kockott, went in to get the turnover.

As the penalty was awarded to Castres, Ashton held on to the ball, causing fiery South African-France scrumhalf Kockott to try to get it free so he could take it quickly. Ashton wouldn’t give it up, and something else might have gone on that wasn’t visible on camera, angering Ashton.

A dangerous tipping of Kockott followed, and then both players were red carded, much to the shock of Kockott, who pleaded his innocence.

As it was a pre-season friendly, the footage was not of the highest quality and referee Romain Poite was not mic’d up, so we don’t know what was said.

Ashton will appear before an independent disciplinary panel charged with contravening law 9.18.

The former England winger faces at least 6 weeks out of the game if it’s deemed a low-end offence, with a mid-range offence resulting in 10 weeks out.

In the same match, Alexandru Tarus was also shown a red card for dangerous play in a ruck, as he dived in head first, contrary to law 9.20.

Both disciplinary hearings will take place in London on Thursday this week.