A fascinating look, and listen, at Christian Lealiifano mic'd up during a match 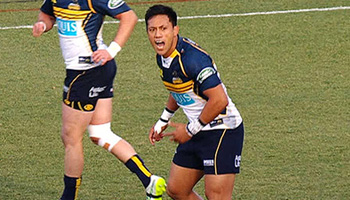 Rugby HQ once again gave us something special last week as they mic’d up Brumbies star Christian Lealiifano in the match against the Crusaders.

As you will hear in the video, the talking that players do during a game is constant and the impacts in the tackle area are nothing short of thunderous.

We love mic’d up players here at RD and believe there should be at least one every game.

His total of 155 points means the playmaker was the fifth highest points scorer in the entire league. He also scored the third highest amount of conversions with 30.

Do you think Lealiifano should be starting 10 or 12 for the Wallabies during the Rugby Championship and World Cup? Or do the stats not tell the whole story?