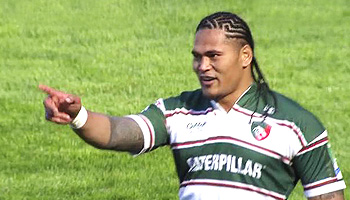 As Leinster continue to paint Ireland a shade of blue following their Heineken Cup victory over Leicester on Saturday, we look back at one of the moments of the match as two big wingers went up against each other in a heavyweight contest that was emphatically one sided.

Shane Horgan was picked to start for Leinster with coach Michael Cheika knowing all too well that he’d be up against the power of the Samoan bulldozer Alesana Tuilagi.

Early in the match we saw Rocky Elsom storm over the top of Tuilagi, and not too long afterwards Horgan gave him a little shove over the touchline, which the powerhouse Tiger winger clearly didn’t take too kindly to.

Horgan is a big unit himself, standing at 6ft4, he’s one of the biggest international wings around. That didn’t faze Tuilagi though, as later in the game he zeroed in on the Irishman, leaving him on his backside, wondering what day it was after this rampaging run.

Tuilagi is famous for those type of charges, but was also recently suspended for a bit of dirty play, returning for the final. He showed great sportsmanship and humility after this devastating run though, as he went to check if Horgan was okay. Or, did he..?

Great rugby all round, and just another high point in a fantastic final for the neutral.