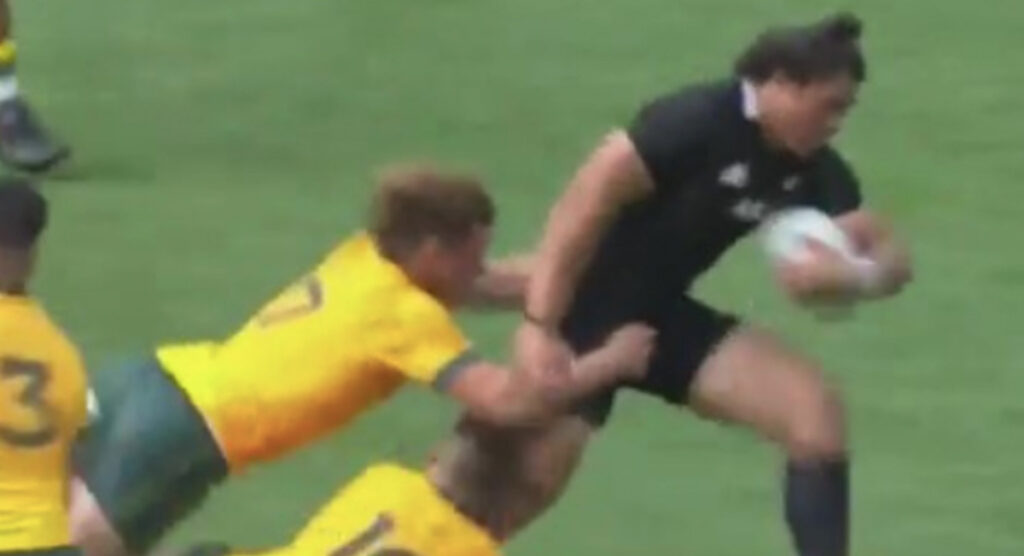 Rookie All Black Caleb Clarke is currently the talk of the rugby world after setting Eden Park ablaze with his man of the match Bledisloe two performance from the weekend. In a funny yet painful admission, Clarke has testified to Michael Hooper’s unorthodox method of slowing him down.

After reviewing the tape, Clarke said: “You know, Michael Hooper grabbed my nuts just then…it was really sore. I was trying to push his hand off… In this run I tried to get him back…Pete (Gallagher), our physio, said, ‘Just get him back’. I tried to do it there.”

Only Hooper can say if the action was deliberate. Chances are that it was just a moment caught up in the tackle. However, you can be the judge. Deliberate or not, it had to be painful.

Outstanding performances in the number 11 jersey inevitably draw immediate comparisons to legendary winger Jonah Lomu. In this regard, Clarke has been no exception.

With his first start, Clarke finished with 138 metres, three line breaks, 12 tackle busts, and two offloads from his eight carries.

All Blacks head coach Ian Foster said: “He’s strong. Caleb’s strong. He loves to play, he gets a smile on his face and we’re just trying to give him the ball occasionally and he’s pretty useful. What a thrill for him.”

Time will tell, but the men in black seem to have unearthed yet another brilliant winger from the seemingly never-ending production line.

His dad, former Auckland Blues and All Black centre Eroni Clarke, was immensely proud as he watched on.