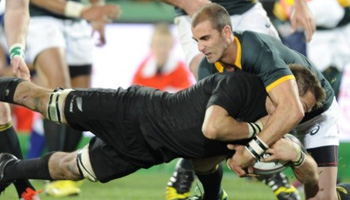 Richie McCaw scored the winning try in his last ever international on South African soil, as New Zealand came from behind to claim a 27-20 victory in another classic, dramatic Test between the two great rivals at Ellis Park.

As with a week ago against Australia, the Springboks led for most of the match and looked on track for victory, but couldn’t close out the game, thus ruining their chances of a Rugby Championship title.

They had the All Blacks on the ropes for a large portion of the match though, with Kiwi coach Steve Hansen commenting that he felt his side was lucky to have things square at 10-10 at the break. “We were very lucky to not be down 30 points, that’s how well the Boks played,” he said.

Debutant flyhalf Lima Sopoaga kicked three conversions and two penalties as Ben Smith and Dane Coles scored excellent tries for the visitors, before captain McCaw stepped up late in the game with a brilliant lineout variation. When asked about if they’d practiced it a lot during the week, McCaw confirmed it.

“We did. We actually had a debate whether it would be No 9 or myself. So I had to pull rank and say I will take that slot, so I was pretty happy it worked,” McCaw said.

The home side have plenty to be positive about, with youngsters Jesse Kriel and Damian Da Allende both having top quality games, while Kriel scored his second try in two Tests, and acted as provider for Willie Le Roux’s well taken try.

Injuries and replacements again proved problematic though, disrupting the flow of their game, while for New Zealand their players came on and slotted into the tempo of the match instantly, giving them the edge in the final ten, even after losing Sam Whitelock to the sinbin.

With senior players set to return and talented youngsters having been blooded, this campaign is not all doom and gloom for the Springboks, who were again led valiantly by inspirational Schalk Burger, who played at number eight in the absence of Duane Vermeulen.

“We are doing something right because we are putting teams under pressure,” said the stand in South African captain. “We created a lot of opportunities, but we couldn’t put them away.”

The highlights are down currently but you can view the full match on page two of this post, and reaction from the All Blacks below. Highlights will replace this soon if possible