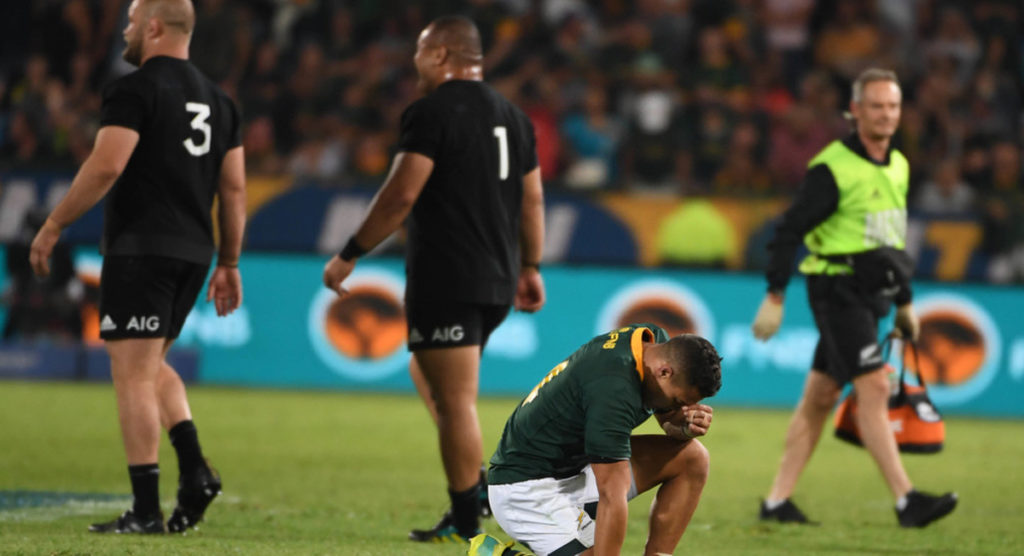 The All Blacks were made to dig deep for their 32-20 come from behind win over the Springboks in Pretoria. This follows South Africa’s 36-34 win against them in Wellington, as the two rivals effectively went square in this year’s Rugby Championship.

While the first half was a physical, fascinating battle that ended 6-6 at the break, in the second half the capacity crowd at Loftus Versfeld Stadium got to see some free-flowing rugby.

Thanks to tries by Jesse Kriel, Damian de Allende and Cheslin Kolbe, as well as superb goal kicking by flyhalf Handre Pollard, South Africa stretched out to a 30-13 lead with twenty minutes left in the game.

While a second successive win over their old foes looked on the cards, the champions fought back admirably, taking their opportunities and showing real heart to get over the line with tries by Rieko Ioane, Scott Barrett and Ardie Savea. The latter scored in the final minute.

“For 70 minutes we did a lot of things right, but we had some soft moments and against the No 1 team in the world, you can’t afford to do that,” said Springbok captain Siya Kolisi.

“That’s probably where we lost it. I don’t think we deserved to lose but they really stuck to their game and perhaps we switched off for a split second.”

New Zealand skipper Kieran Read was proud of his troops for staying in the fight right until the end.

“[I’m] so proud of our men. A lot of sides would have just rolled over, but [we] backed ourselves, and just kept going. We kept backing ourselves, backing what our plan was, fortunately enough, we had just enough time to do it.”

Springbok coach Rassie Erasmus said that despite being disappointed with the win, the belief is back.

“The last three games between us have been decided by no more than two points and when we run out against them now, the game can go either way. I’m proud we’ve got back to that position.

“It gives me hope and belief that if we do a few things right we will be in with a real chance at the next year’s World Cup.”

“I remember from when I was in Ireland, seeing New Zealand come back against the Irish from an impossible position so I never thought the game was in the bag, even with five minutes to go. That’s New Zealand’s culture, that’s how they do things and that’s where we have to get to. We will learn from this.”

Watch Supersport’s post match breakdown of the contest below