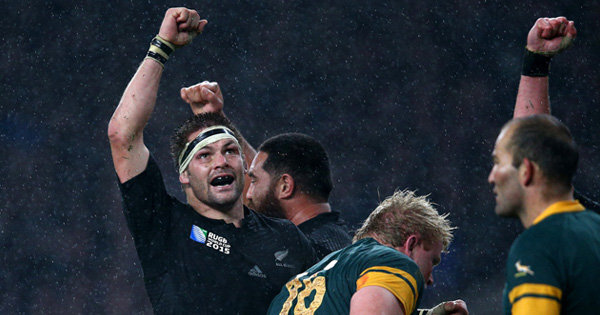 The defending champions are through to their fourth Rugby World Cup final after holding off South Africa in another epic battle between the two sides. New Zealand scored two tries to win 20-18, despite the Boks pushing them all the way at a rainswept Twickenham stadium.

The Springboks persisted with the maul, kick chase game, but came up short in the creativity deparment when they needed a little more attacking threat against an organised All Blacks outfit.

While young Handre Pollard kicked 5 from 5 kicks, with Pat Lambie slotting one after coming on, the defending champions scored two tries and never had their tryline threatened.

New Zealand’s nous allowed them to hold off the powerful Springboks, who tested the champs for the first time in this year’s tournament.

“We did it the hard way today. It was always going to be that way but we’ve got a crack at it next week,” said captain Richie McCaw. “We’ve been saying they would bring everything. There were no surprises and we had to dig deep to get the result.”

A lot of the Bok troubles came from poor kicking and lost lineouts, giving them a poor platform.

Coach Heyneke Meyer said they simply weren’t good enough on the day. “We believed we were good enough to beat them but we just weren’t. We wanted to make our country proud and we didn’t.”

New Zealand now have a chance of becoming the first country to ever retain the title.

Highlights below, plus post match interviews and pre-match anthems and Haka