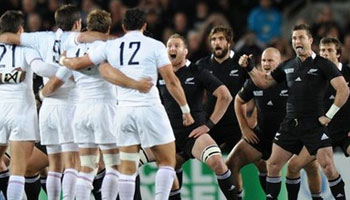 The All Blacks put their 24 year nightmare behind them as they beat France 8-7 in the lowest scoring Rugby World Cup final ever. France came to play, and made their intentions clear just before kick off as they challenged the Haka in a unique way.

Wearing their white away strip, France linked arms and formed a ‘flying V’ before marching forwards towards the All Blacks, making it clear they weren’t going to simply make up the numbers in this one, their third RWC final.

“I wasn’t alone, I had my teammates with me. I felt them close to me — too close at one stage, because they wanted to go across the field and hug New Zealand,” captain Thierry Dusautoir said.

“It was necessary to calm them down. But it’s a great moment we’ll all remember. I felt during the week that the players wanted to do something during the haka, like they did in 2007. Someone came to see us, who I won’t name, who told us this idea. We thought of it this morning.”

Prop Fabien Barcella was one of the Frenchman who continued forward, having to be held back at times. “It was a ‘V’ for victory, quite simply. It’s the chance of a lifetime to play a final at Eden Park, we didn’t want to miss out on it,” Barcella said.

“It came from the heart, and showed that the 30 of us were together tonight.”

Francois Trinh-Duc, the flyhalf who started off the bench, said that the players needed to make an impression on their opponent. “We had to throw down the challenge to them,” Trinh-Duc said.

What did you think of what France did in response to the Haka?

Highlights from the match can be viewed on the official RWC website. Other clips and coverage will continue on RD over the next few days. Please get in touch if there’s anything you’d like featured.