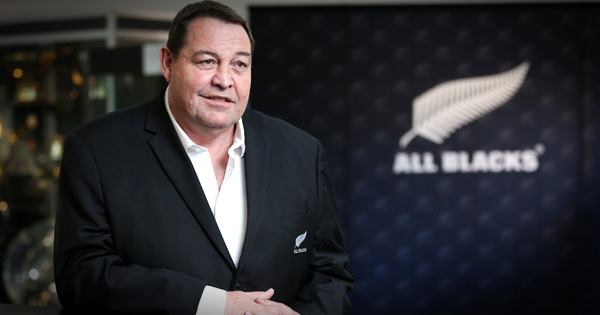 Today the New Zealand Rugby (NZR) confirmed that All Blacks head coach Steve Hansen will be with the team until after the 2019 Rugby World Cup in Japan, extending his contract from 2017. Hansen won the World Cup as assistant in 2011, then head coach in 2015.

“Steve’s winning record is unsurpassed in the modern era. Since becoming Head Coach in 2012, he has recorded 52 wins in his 57 Tests to date, with two draws and just three losses. That’s remarkable and unparalleled in international rugby.

“While Steve has a fantastic winning record, equally positive has been his intuitive ability to continue growing the team through meticulous selection and rigorous preparation, and to inspire the players to reach even greater heights.

“He’s also lead an era where the team have been outstanding ambassadors for fans both here and around the world.  Rugby World Cup 2015 was a great example of a team that wanted to be successful both on and off the field and they recognised that they could achieve a lot by doing so.”

Steve Tew added: “I think it’s important at this time to also acknowledge Steve’s long-term commitment to New Zealand Rugby.  Apart from his stint with Wales in 2002-2004, he has spent his entire time coaching in New Zealand, stretching back to 1996 with Canterbury and the advent of professionalism.

“He continues to be a great servant and key figure not only in New Zealand but also internationally, and on behalf of New Zealand Rugby and the Board, including the All Blacks players and management, as well as the wider rugby community, I’d like to congratulate Steve on his reappointment.”

World Rugby’s Coach of the Year from 2012-2014, 57-year-old Steve Hansen CNZM has been coaching for more than two decades at club, provincial, Super Rugby and international level.

Mosgiel-born Hansen was appointed Head Coach of the All Blacks following the team’s Rugby World Cup 2011 victory, after serving as Assistant Coach for eight years, and took the team to back-to-back RWC victories in 2015.

The All Blacks have fashioned an enviable record under Hansen with 52 wins to date, just three losses and two draws for a winning record of 91 percent.

As well as victory at RWC2015, Hansen’s record includes the historic unbeaten season of 2013, victories in the Steinlager Series and Investec Rugby Championship, and the retention of the Bledisloe Cup.

In his time, the All Blacks have been named World Rugby Team of the Year four years running.

Prior to joining the All Blacks, Hansen coached Wales for two years, was Assistant Coach of the Crusaders during their title-winning seasons in 1999 – 2001 and won titles with Canterbury in 2001 and 1997.