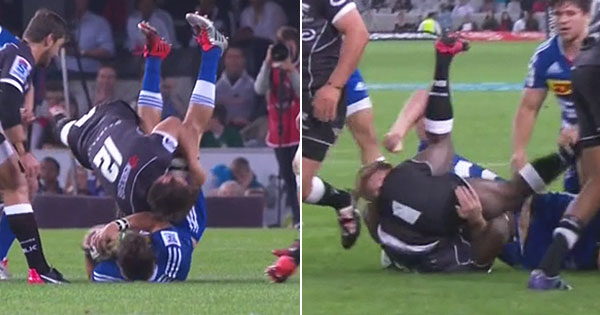 Both players were charged with contravening Law 10.4 (j), which applies to the lifting tackles that took place. Sharks centre Esterhuizen and Stormers fullback Du Preez both pleaded guilty to the charges.

Esterhuizen was suspended from all forms of rugby for four weeks, while Du Preez received a six week ban. In the latter’s case, it was viewed as a mid-range offence, with two weeks added on as a deterrent to ‘send a further message that this type of tackle cannot be tolerated in the game due to the risk it poses to players.’

It was then reduced due to mitigating circumstances such as remorse and a clean record.

In Esterhuizen’s case, which was similar to the Francois Steyn incident earlier this season, judicial officer Nigel Hampton stated: “It appeared from the video that the actions of the Sharks’ halfback had some effect on the Stormers’ player as he came to ground on his upper body. However, Esterhuizen was clearly the major contributor to this dangerous tackle, which he accepted.”

Nature of Offence: Law 10.4 (j) Lifting a player from the ground and dropping or driving that player into the ground whilst that player’s feet are still off the ground such that the player’s head and/or upper body come into contact with the ground is dangerous play.

Wallabies captain Michael Hooper says the three players banned for breaking the team's alcohol protocols have already taken steps to win back the trust of the group.