The South African national side have not played a huge amount of games since their powerful win over England in the 2019 World Cup Final. They made their first outing since that game just under 10 months ago in a 40-9 win over Georgia. The Springboks followed that with a series victory over the British and Irish Lions at home, albeit in front of empty stadiums due to Covid-19 restrictions.

Since then it has been a mixed bag for the three-time world cup winners, with losses from the likes of England and Australia, and victories over the mighty All Blacks and the ever entertaining Argentinan side.

The squad remains largely unchanged from their world cup exploits, with their midfield looking as strong as ever.

The centre partnership of Damian de Allende and Lukhanyo Am is one of the most feared in world rugby. Having started nineteen tests together, the chemistry these two players have can create such a threat to opposition sides. 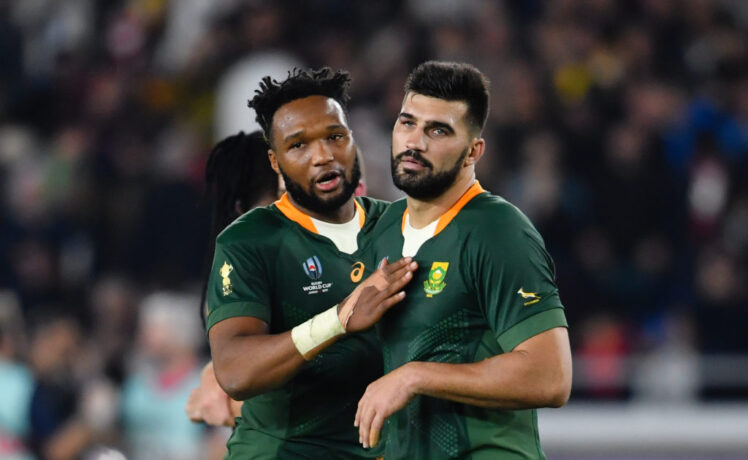 One player that could break up this partnership however, is Andre Esterhuizen. The 6 ft 4 in (1.93m), 17 st 11 lb (113 kg) inside centre has been tearing it up in this year’s English Premiership for Harlequins. With multiple Player of the Match awards already this season, he has been tipped to be this year’s Player of the Season by BT Sport pundit Ugo Monye.

Esterhuizen achieved the last of his eight caps against Argentina in 2019 before he was dropped from the squad for the 2019 world cup.

When questioned back in early January reference to whether he had been contacted by the national side, Esterhuizen was honest in his response:  “no, nothing recently, hopefully someday, let’s see what happens”.

His recent performances have not gone unnoticed by the South African management, however. Rugbypass revealed in late January that Esterhuizen received a congratulatory message from the national head coach Jacques Nienaber, after a string of Player of the Match performances.

Used primarily as a battering ram, Esterhuizen seems to gain yards whenever he has the ball in his hands. Hitting the defensive line backwards time and time again, he allows his team to get on the front foot.

Not only does he have the use of his ‘Andre the Giant’ sized frame, but he also has some deft hands and an absolute unit of a left boot which is often used to gain some serious territory down the field.

With his performances stepping up and up every single week, you have to wonder when, not if, the call will come.