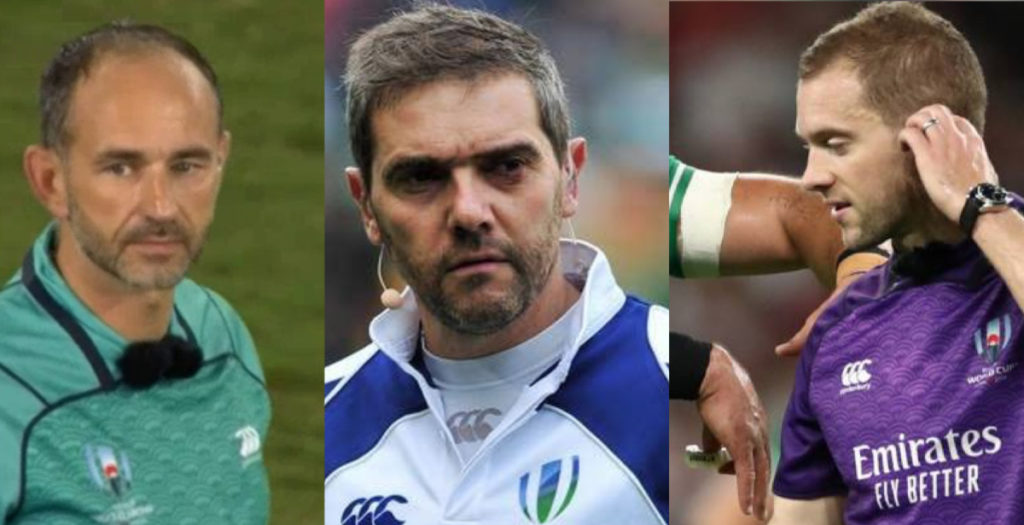 World Cup Officials are taking a lot of criticism over the consistency of decisions surrounding tackle heights so fair in the tournament in Japan.

The first major incident, which went to the citing committee, was Reece Hodge’s hit on Fiji flanker Peceli Yato in round one of the tournament, with the Wallaby winger receiving a three-match ban – quite rightly.

However fans are unhappy with the consistency of decisions. The next incident which came under the spotlight was a tackle made by England’s Piers Francis in the opening play against the USA, which received no ban at all.

But now the officials have been criticised further following today’s ruling against Wallaby centre Samu Kerevi, who conceded a penalty for leading into a tackle on Wales fly half Rhys Patchell with his forearm.

Player safety is at the centre of all these decisions but coaches, payers and fans are beginning to not only get confused on the matter, but frustrated too.

Aussie fans chanting ‘bullshit’ and I’m with them. What else is Kerevi meant to do there? Patchell’s technique all wrong.

I think Hooper has a point there. If Patchell wants to meet Kerevi up high there where is Kerevi supposed to put his arms to protect himself from the defender? Does he submit his physical dominance because Patchell is high? #WALvAUS #RWC2019

What is Kerevi supposed to do when carrying the ball? #AUSvWAL Tackle technique is poor from Patchell.

Breaking: England centre Piers Francis has NOT been banned.

The disciplinary panel felt that “the appropriate on-field sanction was a yellow card” due to these mitigating factors. pic.twitter.com/k1ShfMv12Z

That absolutely was a red card for USA but how can the Piers Francis tackle from the start not have been seen by ref or TMO…..it’s that lack of consistency & protection that drives ppl mad #RWC2019

And England’s Piers Francis receives no sanction for his tackle v the USA which has now been deemed to be only worthy of a yellow card. Clear as mud this disciplinary game…

The citing of England centre Piers Francis for a dangerous tackle raises another embarrassing question: Why did the referee/tmo not consider it dangerous enough to take a look? Another glaring miss.

World Rugby Rule 17.2(a):
No referee shall penalise New Zealand for any infringements around the ruck or maul area

Time for WR to make a de-selection of one of their big name refs? – asks former referee Paul Smith #RWC2019 #RWC東京 https://t.co/lHZajTMsfw

So ….. Rugby Union is no longer a contact sport?
Just a rubbish game.
The stars of this game are the referee and TMO.#AUSvWAL

Hey @WorldRugby stop ruining the game we love with this ridiculous over refereeing! Have any of you ever played rugby? How else is he meant to carry the ball? We don’t need you to referee that

So one week TMOs aren’t doing enough…now they’re doing too much?

Law 9.12 – a player must not strike another with any part of arm.

This is nothing new. Fonotia & Schoeman banned for forearm smashes last season in @PRO14Official