'Aphiwe can’t believe it. We were starting to get ready to play again' - Dyantyi banned for four years 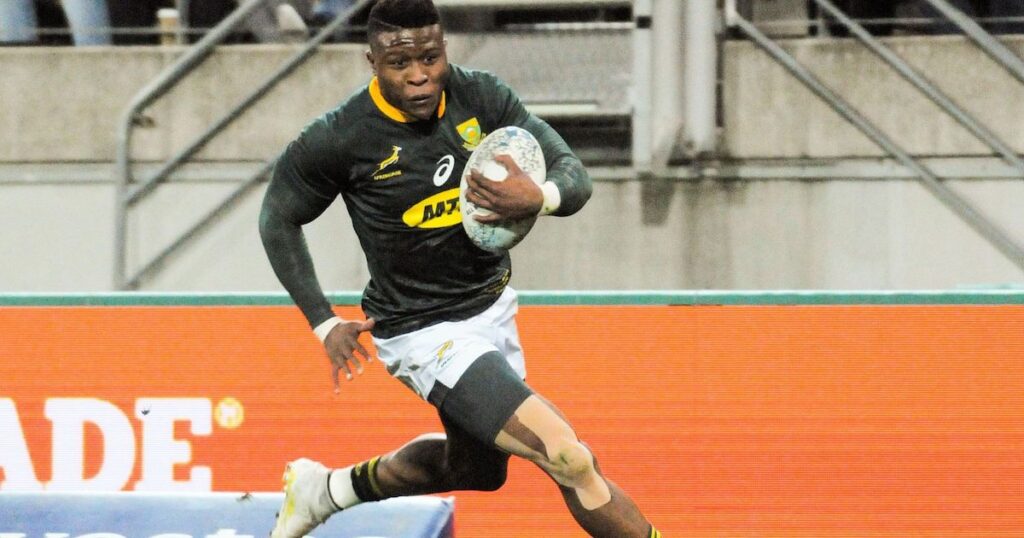 South African winger Aphiwe Dyantyi has been handed a four-year ban from rugby following his failed drugs test in 2019, according to local reports in the country.

Dyantyi, who was named World Rugby’s Breakthrough Player of the Year at the end of 2018 and had been tipped to play a major role in his side’s triumphant World Cup campaign the following, tested positive for three banned substances while in camp with the national team.

The substances were metandienone, methyltestosterone and LGD-4033, and while Dyantyi has always pleaded innocent to the charges of delibertately taking performance enhancing drugs, the 26 year-old was deemed to have not provided enough proof he had ingested them in error.

The South African Institute for Drug-Free Sport has therefore dished out the new entry-level suspension, implemented by the World Anti-Doping Agency (WADA), of four years, meaning Dyantyi will not be eligible to play until just before his 29th birthday in 2023.

Dyantyi’s agent, Gert van der Merwe, said they were shocked by the outcome.

“The decision makes no sense. I still have to read the full decision. My legal team and I plan on analysing the decision next week and we will decide whether to appeal,” Van der Merwe said.

“I can’t give any details, since the case has not yet been finalised. If it were up to me, we would definitely appeal. The problem is that there are costs associated with it.

“Aphiwe has not received a salary for the last 18 months (he is no longer contracted to the Lions) and we’re trying to see what we can do. I believe the decision is wrong. Aphiwe can’t believe it. We were starting to get ready to play again.”

The Dyantyi affair is the latest in another suspension for a South African player, with former Springbok hooker Chiliboy Ralepelle receiving an eight-year ban from the sport following his third failed test in 2019.

Ralepelle had his first failed test in 2009 rescinded after it was found that he and team-mate Björn Basson had ingested the drug methylhexamine accidentally due to a contaminated diet supplement before South Africa’s End-of-Year test with Ireland in Dublin.

Former Stormers, Munster and Gloucester lock Gerbrandt Grobler also caused controversy when he was banned for two years after testing positive for the anabolic steroid drostanalone after a Currie Cup match in 2014.

According to the South African Institute for Drug-Free Sport’s current annual report, rugby is one of the most tested sports in the country, with 317 urine samples collected 2018/19, albeit just seven blood samples were tested in the same period.

There are currently 12 players in South Africa who are serving or due to serve a drugs ban, which compared to the United Kingdom (26), is far less.

Dyantyi’s high-profile episode has renewed calls for increased testing in and out of competition within the rugby sphere, while the controversial issue of carrying out testing at under-age level also continues to polarise opinion.

'Aphiwe can’t believe it. We were starting to get ready to play again' - Dyantyi banned for four years | RugbyDump - Rugby News & Videos