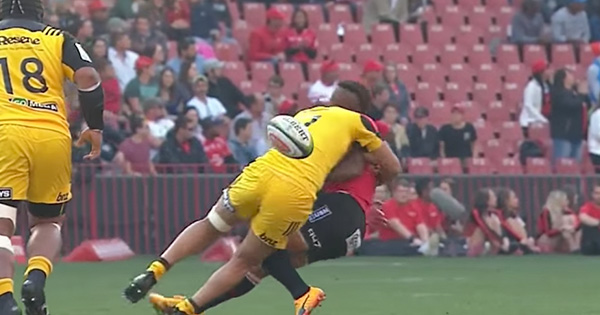 Lions playmaker Elton Jantjies was on the receiving end of this massive hit during the final minutes of the Super Rugby Semi-Final match between the Lions and Hurricanes. The menacing Hurricanes forward showed that he had no plans of slowing down before the final whistle.

Jantjies was ultimately fine, but it was a somewhat scary moment for the hosts as he seemed shaken and was slow to get back up. Surely the Lions would’ve hated to lose him so late in the game.

Savea flew in head first and couldn’t wrap his arms quickly enough, raising concerns about illegal play. After taking another look, referee Jaco Peyper said it was actually just a really solid hit, but was fine.

The moment couldn’t put a damper on the Lions’ come-from-behind victory, but one can assume Jantjies had a discussion with Faf de Klerk concerning hospital passes after the game.

The Springbok number ten was instrumental in the second half as the Lions put up 5 tries to knock out the reigning champs 44-29.

They will host the Crusaders in the final this coming Saturday.