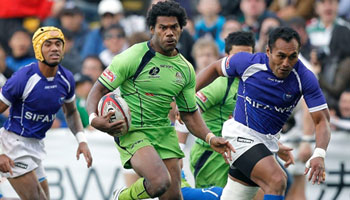 Wearing lime green, Australia made their way through the tournament playing some inspired rugby, culminating in their impressive win over Samoa in the Cup Final.

“We’ve really come a long way, it’s not easy to win a cup final. They showed a lot of tenacity, courage and commitment against Samoa. It was an extraordinary final and I’m really proud of them,” said Australia coach Michael O’Connor.

Captain Ed Jenkins scored the decisive try at 26-21 to Samoa, giving Matt Lucas the unenviable task of having to slot the dropkicked conversion to win the game. As you can see in the highlights below, his never didn’t falter and Australia won the game on the final whistle.

“It’s a pretty young squad and we had an idea today that we should never give up until the final whistle, and we never gave up,” said skipper Jenkins.

New Zealand, who were beaten 17-12 by Samoa in the semi final, stretched their lead at the top of the overall standings. They now lead Fiji by six points on 128, Fiji are at 122, and South Africa are third with 105. Australia are up to six place now, with 84 points.

The next round, and penultimate of the series, is in Scotland May 5-6.