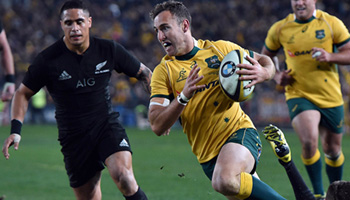 The Wallabies achieved victory over the All Blacks for the first time in four years when they won 27-19 in Sydney on Saturday. Nic White’s late try gave them a thrilling Rugby Championship title victory in from of 73,824 fans.

Scrumhalf White came off the bench to kick a long range penalty and later convert his own try as the Wallabies got one up on their arch rivals for the first time since 2011. The All Blacks had led 19-17 with 11 minutes left before White’s injection changed the game.

For the Wallabies victory not only means a Rugby Championship title, but also a Bledisloe Cup boost ahead of the decider at Eden Park next weekend. It also ends a 10-match losing streak against the All Blacks.

“We fought hard for each other, and the crowd really lifted us there at the end,” said Wallabies captain Stephen Moore. “Both sides pushed the boundaries and it was a good contest.”

All Blacks captain Richie McCaw paid tribute to the opposition. “They took their opportunities. It was a pretty intense sort of match. It probably came down to a couple of missed tackles that counted at the end.

“I thought when we got back in the game, when we got ahead with 15 to go that’s when we needed to be really sharp, not playing at the wrong end of the field, and a couple of lapses on defence was the difference in the end.”

Following the win, the Wallabies have moved up to 2nd in the official World Rugby rankings.

Alex Sanderson has revealed to RugbyPass the bizarre moment when he first bumped into Steve Diamond since replacing him as the Sale boss.

Another change for England as Bath confirm serious Watson injury

It has been a miserable Tuesday for Eddie Jones, the injured Anthony Watson following Luke Cowan-Dickie out of the England squad.

Josh Lord isn't losing any sleep over a potential All Blacks debut this weekend, at least according to his considerably more senior teammate Sam Whitelock.

It's been a madcap 24 hours for Jamie George as he is now in the England squad a day after he was a high-profile omission by Eddie Jones.