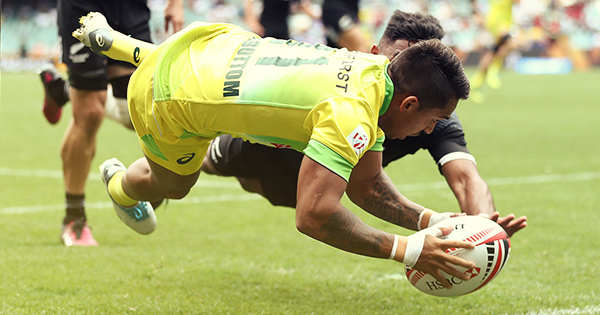 Australia had a Sydney 7s to remember as both the Men’s and Women’s teams came out victorious, with the former surprising the competition by picking up their first tournament win since 2012. They beat current Sevens Series champions South Africa in the Cup final.

On an entertaining weekend of Sevens rugby, Allianz Stadium played host to the final between the only two teams to go unbeaten all weekend. Australia proved too strong at home though, as they blew South Africa away with five tries and a 29-0 victory, going on to lift the trophy.

Argentina finished third overall after they beat the United States 31-10 in the Bronze Final.

“It is still hard to take it in and it is pretty special, but we have been talking about this for a long time,” said HSBC Player of the Final, Lachlan Anderson. “We started the work last July and drew a line in the sand as we hadn’t won for a while. We put the pieces in place and its great that we got the reward this weekend.”

With the Sydney 7s win, Australia move up to third (43) on the overall Series standings, behind South Africa (58) and New Zealand (54).

The Australia Women earlier thumped New Zealand 31-0 in their Cup Final, creating history in the process. Since 1999, no team (Men or Women) has ever won a tournament without conceding a point, but Australia’s ladies did just that, scoring 213 points in the process.

“I’m just stoked with the way that we performed,” said coach Tim Walsh. “Everyone is talking about zero points, which was pretty pleasing and defence is all in the desire and attitude and they certainly showed that.

“In our plan, this is one tournament we were targeting – we’ve got the Commonwealth Games and for the team the World Cup as well. I think we’ll celebrate tonight and then be very tired when we get back to work on Wednesday.”

Canada finished third after beating Russia 40-12 in the Bronze Final.

It was also a good weekend for grassroots rugby, after the Australian Rugby Foundation pledged to donate $500 for every Australian try scored. That resulted in a $26,000 total. All funds raised will go directly to the foundation’s grassroots and community initiatives.