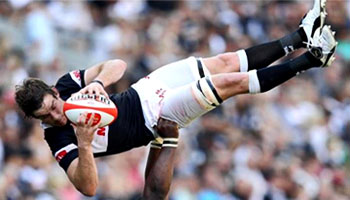 The focus shifts slightly to domestic rugby now, as this weekend is the final of the Currie Cup in South Africa, a game that features the Sharks and the Lions. Here’s a quick clip that was requested from the first semi, as well as some great pics.

After a bruising game with the Wallabies in the quarter final of the Rugby World Cup, the Springboks returned home and got straight in the thick of it, with the Sharks players coming off the bench to give the Lions to make the semi finals.

The same two sides meet again this coming weekend in the final, with the Lions having considerably less big names to work with. Two to be exact. They showed in their semi final against Western Province that they have no problems taking on the big boys though.

They will need to contest with a hungry Springbok front row though, comprising of Jannie Du Plessis, his brother Bismarck, and then the Beast, Tendai Mtawarira. The latter scored a try in their beating of the Cheetahs on Saturday, and was part of this rather amusing, albeit close to disastrous, bit of play.

It’s not the first time he’s been photographed holding a player up in the air, adding to the famous nickname that is chanted around the grounds whenever he gets the ball or makes a tackle.

Above is a great photo from the Sharks’ games against the Crusaders in Super Rugby earlier this year, as well as one from the clip you’re about to see. Both can be clicked to view in full size.

It’s just a short video, but definitely not something you see every day. Thankfully, he held onto him.