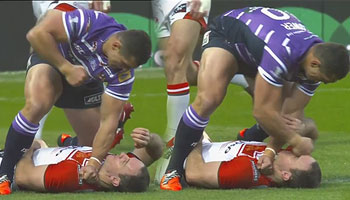 Wigan Warriors prop Ben Flower was shown a straight red card for punching in the opening minutes of the Super League Grand Final. The Welshman hit Lance Hohaia on the floor despite the first punch appearing to have knocked the 31-year-old Kiwi out.

Flower has since apologised to everyone involved, including Hohaia and the sport of Rugby League.

“I am so sorry for what happened last night,” Flower said in his statement.

“There is no defence for my actions. It is something that happened in the heat of the moment. I instantly regretted it and am devastated that I allowed myself to punch someone like this.

“At Wigan we may aim to dominate teams, but we don’t aim to hurt people. I firstly offer my apologies to Lance. I hope he is OK. I’d also like to say sorry to my team-mates, our fans and the Wigan club. I accept I’ll have to live with this for the rest of my career.

“Finally, I’m sorry to the sport of rugby league. It was a big night and I know I’ve taken attention away from a special event.”

Hohaia has said that he doesn’t hold a grudge, and doesn’t remember the incident.

“Sometimes these things happen in a game, in the heat of the moment people do things they regret,” Hohaia told the BBC. “I’ve done some silly things myself, so I don’t hold any regrets against Ben – he’s probably disappointed with himself.

“I don’t remember the incident – people have been telling me what happened. I don’t think the nose is broken, but I’ll have a scan on it in the week. I wanted to go back on but the doctor wouldn’t let me and obviously my health goes before anything else.”

This was covered via Leaguedump, where we bring you Rugby League coverage daily. Follow on Facebook for more on this story and everything else in the world of Rugby League.

Official highlights from the final:

Springboks blast back after 'unfit, unskilled' criticism from NZ

The Springboks have been asked about the brutal nature of the Rugby Championship criticism they suffered from New Zealand critics this week.