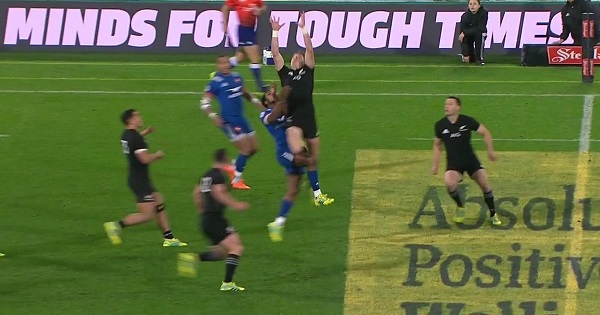 A controversial red card for French winger Benjamin Fall in the 12th minute helped New Zealand claim a 26-13 victory in Wellington on Saturday, wrapping up the three-Test series with a match to spare.

Fall was sent off after a careless in-the-air challenge on Beauden Barrett, which ended with the All Black fly-half landing on his head. From then on, it seemed the home side would romp clear.

Things didn’t look good for the visitors after Joe Moody crossed for the first try of the game. Ben Smith and Jordie Barrett added further scores as the home side took a healthy 21-6 lead in at the half-time break.

The younger Barrett bagged another in the second half but France held firm and battled admirably until the very end to keep the scoreline largely respectable.

Cedate Gomes Sa finished off a terrific move in the final minute after Kélian Galletier was released into space following a great offload from scrum-half Baptiste Serin.

Jules Plisson added the conversion to end what could have been a mauling from the current world champions, but instead showcased the determination from Jacques Brunel’s men.

For the All Blacks, they continue what is essentially a preparation series for the Rugby Championship with another victory over the visiting French.

The Fall red card was viewed as harsh by some fans and former players, who felt that he had his eyes on the ball and made an effort to contest. For others, it was a clear cut red. Your thoughts?

Fall’s red card has been rescinded after video evidence proved that he had his eyes on the ball at all times and only ever had the intention of contesting it.

“The line that the Player is running is then altered by his collision with NZ #13. This collision then causes the Player to lose his balance, stumble and be propelled or pushed towards the path of NZ #10. By reason of those matters the Player’s attempt to contest the ball was compromised.” Read more..