Bhubesi Pride project update, chat with founder and how to apply 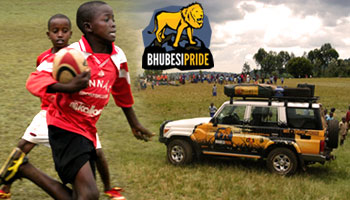 Another hugely successful rugby coaching mission in Africa has come to an end for Bhubesi Pride, as they now look ahead to the 2014 recruitment process. We caught up with founder Richard Bennett to learn more about this year’s ground breaking trip.

The team have now completed the 15,000km trek through ten African countries. Starting in Ethiopia and ending in Cape Town, the aim is to coach rugby at schools level while simultaneously promoting its core values, and develop sustainable leagues and competitions.

The video below sees the team three quarters of the way through this year’s mission, with another video update still to come. We caught up with Bennett to find out what it was like this time around.

Rugbydump: We have to ask the obvious question; have you guys made a change?

Richard Bennett: Absolutely. We’ve coached close to 3,000 pupils in 29 schools and communities in ten countries this year. More significantly we empowered 105 local staff in the ten countries we worked in.  This contributes massively to ensuring rugby can and does have the ability to continue and grow. But we need to get back next year to monitor progress and up-skill more coaches.

Rugbydump: How did the coaching clinics go in each country?

RB: They were nothing short of phenomenal. During our team training, I asked the coaching team to brainstorm various ways they believe their skill-sets and experience could add value in the schools we worked in Africa.

We have 3 core values: To unite children through the game, to empower locals, and to inspire leadership and expanded relationships. The lads took these sentiments and made them their own, applying immense sensitivity and pride when coaching the youngsters and giving local support staff real confidence when coaching and reffing themselves.

Rugbydump: What did this year’s coaching team gain from the experience?

RB: Coaching in Africa is a challenge, but I’m convinced this year’s team relished every moment. Whether Ryan was negotiating session times with a head teacher, or Juan Pablo and Ben were managing up to 50 staff at a tournament, or Jon was running referee seminars, the rugby side offered a wealth of opportunities that really develops your character!

Then there’s the beautifully scenic drives taking you from country to country past sights like Mount Kilimanjaro, through Mikumi National Park or the Fish River Canyon. The guys also did activities like rafting on the Nile and bungee jumping in Zambia and South Africa.

To build on this year’s work, Bhubesi Pride are looking for exceptional candidates. Coaches, male and female, can submit an application form online. Successful applicants will receive personalised teamwear, extensive training, as well as travel related expenses, food and acommodation covered. They will also have pride of place on the team, and the trip of a lifetime.