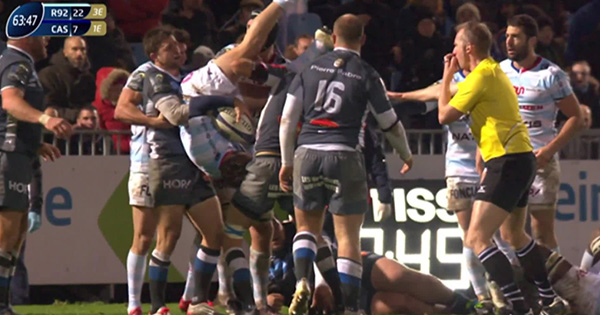 Nothing declares you want to spend several weeks on the sidelines like head-butting an opponent. Racing 92 back Juan Imhoff will do just that after head-butting Castres scrum half Rory Kockott in their match this past weekend.

Following a disciplinary hearing in London on Wednesday, Imhoff’s red card was upheld and he was initially banned for 10 weeks, pertaining to the following:

“Punching or striking. A player must not strike an opponent with the hand, arm or fist, including the elbow, shoulder, head or knee(s).”

However, due to his guilty plea and clear record, the suspension was reduced to five weeks.

The incident came in the second half of the Champion’s Cup clash last weekend. In what was a wacky play, Kockott decided it would be a good idea to lift fellow scrum half Teddy Iribaren into your classic Piledriver.

Imhoff took exception by showing Kockott another classic move from the WWE.

When the dust settled, Wayne Barnes had produced both a yellow card for Kockott and the red for Imhoff. Racing won the match 29-7.

Provided there is no appeal, Imhoff is free to play again on January, 22 2018.

Brian O’Driscoll and Lawrence Dallaglio reflected on the incident, agreeing with the red card but saying that the yellow was a bit harsh, seeing as Kockott brought him back to ground safely.