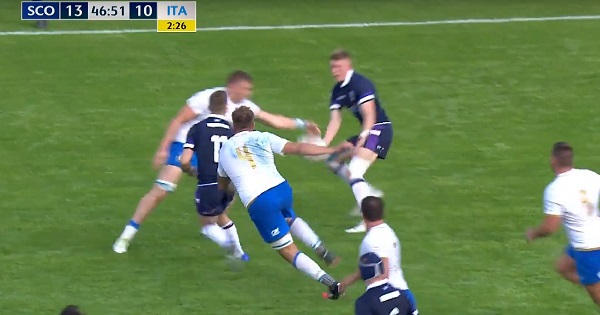 The U20 World Championship kicked off yesterday in France with a number of closely fought encounters suggesting this year’s edition is set to be the most competitive yet. Below is one of the stranger incidents of the day though.

Italy U20s got off to the perfect start with a 27-26 victory over Scotland U20 in Béziers, despite losing a man to the sin-bin in the first half.

Indeed, they were lucky they weren’t reduced to 13 men early in the second period as Lodovico Manni appeared to deliberately knock the ball on as the Scots were on the attack.

Bizarrely, the referee ignored what seemed to be an obvious infringement on the Italian side. Instead he opted to attend to the injured lock Edoardo Iachizzi.

Iachizzi was unfortunate enough to have copped a fistful of teammate Manni just before that, as the pair tried to tackle Scotland winger Kyle Rowe.

What Manni probably didn’t realise was that in inadvertently taking out his teammate, he also likely saved himself 10 minutes on the sidelines!

It was a nip-and-tuck match throughout and was ultimately settled by another sin-binning, this time for Sam Grahamslaw late on in the game.

Prop forward Niccolo Taddia was the hero of the game for Italy as he dived over for the winning try in the 83rd minute.