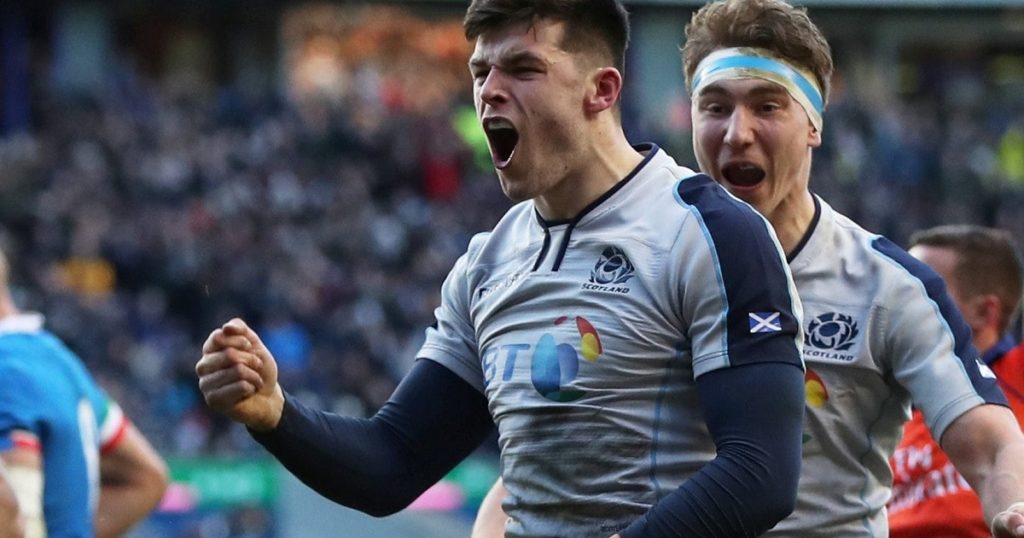 Blair Kinghorn scored a hat-trick of tries as Scotland opened their 6 Nations campaign with an unconvincing 33-20 victory over Italy at BT Murrayfield. The home side secured the bonus-point but might be left to rue a shambolic final 10 minutes where they conceded three quick-fire tries to Conor O’Shea’s side.

Starved of much possession in the first quarter of the match, the Scots were left frustrated that they were only 12-3 ahead courtesy of Kinghorn’s opening brace. Twice they found themselves in try-scoring positions, but a double movement from second-row Grant Gilchrist and a needless penalty short of the line prevented a bonus-point before half-time.

Kinghorn did manage to touch down twice in the same area of the pitch, his first coming from a pin-point accurate cross-field kick from fly-half Finn Russell. The tall winger took the ball on the run and was unopposed towards the line.

His second was finished off after a sublime set-piece wrap-around from Russell, who combined with debutant Sam Johnson before feeding Stuart Hogg coming into the line. Kinghorn picked up the ball at his heels and scampered over.

Scotland dominated the possession stats for much of the second period and got their third try through Hogg following a delicate chip ahead from Russell five metres out. Kinghorn then completed his hat-trick by grabbing the bonus-point after a piercing line-break from flanker Jamie Ritchie.

Captain Greig Laidlaw landed three conversions while Russell slotted one extra. By this point, Scotland were in cruise control, 33-3 to the good.

Perhaps too much cruising for head Coach Gregor Townsend’s side. Having lost Simon Berghan to a yellow card, Scotland seemingly took their foot off the gas and slipped off tackles with alarming frequency. The home side were in all sorts of bother in the final stages.

Scrum-half Guglielmo Palazzani dived over for what seemed the Italians sole consolation try before Angelo Esposito then sprinted over the line after a simple two-on-one draw.

Edoardo Padavani then finished off the match with another simple score under the posts, much to the chagrin of the packed home crowd.

While it took Italy 70 minutes to start playing to their full potential, Scotland were largely comfortable throughout but will need to rectify the severe defensive frailties.