Blind in one eye, this is the moment Ian McKinley made his historic Test debut 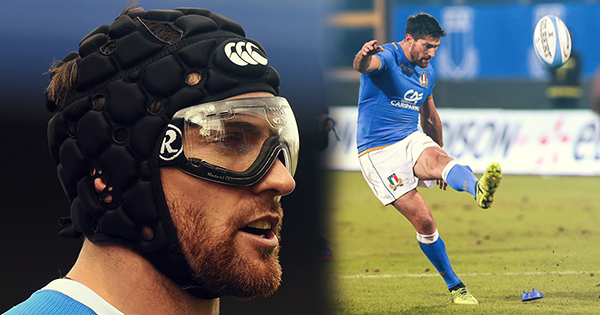 Six years after losing sight in his left eye in a horrific rugby accident, Irish flyhalf Ian McKinley battled the odds to make his much-publicized Test debut, coming off the bench as Italy beat Fiji 19-10 at the weekend.

Once an up-and-coming star in the Irish ranks, by many accounts McKinley was on track to seriously challenge Johnny Sexton for the position vacated by Ronan O’Gara. That is until a freak accident occured that left him eventually blind in one eye.

While playing in the Leinster system, a teammate accidentally stood on his face, thus impairing his vision and essentially starting this long journey.

As he said in the below World Rugby feature: “The vision went straight away in my eye, so obviously I knew there was somegthing drastically wrong.” He was directed to stay still by the team doctor as the eye was “slightly out”.

McKinley actually recovered and was back to playing with Leinster just six months after the initial injury. But more bad news revealed that a cataract had developed and that blindness in the eye was inevitable. To play on would mean serious depth-perception issues and other possible limitations.

Rather than turn his back on rugby, McKinley accepted an invitation to work in Italy as a coach and technical director. Not content with being forced out at the young age of 21, he still possessed skill enough to join PRO14 team Zebre and later, his current team Benetton Treviso.

This time, however, it would be with proper protection – specialized goggles.

This proved to be rather daunting as well, as many governing bodies frowned on the idea, particularly back home in Ireland, where they would not take part in the official World Rugby goggles trial. Once he could prove his new, revolutionary goggles posed no safety hazard to himself or others around him, he was free to wear them. In fact, his play has been good enough to merit selection for Italy.

Though certainly not the path McKinley would have scripted to international Test level success, it is certainly one he’s thankful for, calling his selection to the Azzurri “the high point of my career.”

There’s no doubting where his heart – and skill – now lay. “Italy is my home… Italy has given me a second opportunity when others wouldn’t and for that I owe them a huge amount.”

Last Saturday, six years after the start of his ordeal, 27-year-old McKinley made a historic first appearance for his adopted country, coming off the bench in the 61st minute as replacement flyhalf.

Fiji were still a converted score away until he stepped up at the death to record his first points with a successful kick at goal, helping Italy to the 19-10 win.

He later received high praise from Ireland coach Joe Schmidt, who saw him play in his early days.

“What a great kid. A natural left-footer, a fantastic defender; courageous, but technically smart as well. Can control the game really well,” Schmidt said.

McKinley, who became the first international player to ever wearing special protective goggles in a Test match, has been selected to play again this weekend, when Italy host Argentina in Florence.

Below is a short recap of the special moment that saw him earn his first Test cap.