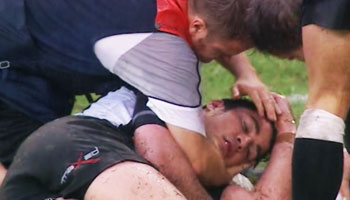 The Sharks look to have ruined their chances of a Super 14 Semi Final place after going down 16-12 to the Waratahs in Durban on Saturday. Coming from behind twice, the Waratahs kept the Sharks tryless to record a determined win.

Brett Sheehan made his 50th NSW appearance when he came on from the bench. It might well be his last game for them though, as he has signed for the Force, and will more than likely miss the rest of the tournament after this hit.

The two test Wallaby put the late shoulder in on Sharks center Brad Barritt, only a minute from full time.

Barritt, who returned this week from his stint in England with Saracens, was knocked out cold from the impact of the shoulder, and unfortunately had a few players land on top of him while lying there receiving treatment.

Whether Sheehan will be cited or not remains to be seen, but theres no doubt that he was lucky to get away with it on the field, as neither ref nor assistant refs saw it.