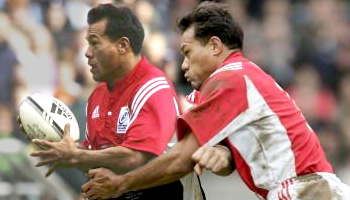 In 2005 the North Hemisphere faced the Southern Hemisphere in an IRB Rugby Aid match at Twickenham. The match was played to raise money for the United Nations World Food Programme to support victims of the of the tragic Indian Ocean Tsunami that wrecked thousands of peoples lives and homes forever.

Top players from around the world were chosen to represent the relevant teams, and a great match was played for a great cause.

The Southern Hemisphere came out tops with a final score of 54-19, with a lot of the Tri Nations players featuring strongly, helped by great performances by Samoans Sititi & Lima.

Over 40 000 people attended the game, and it was a success, reportedly raising over a million pounds for this good cause.

Brian Lima wasn’t feeling as charitable though, as Italian wing Mirco Bergamasco soon found out in the worst possible way. The ‘Chiropractor’ picked on him all day, making Bergamasco wonder what he’d done to deserve that treatment from one of the hardest hitters the games ever seen.