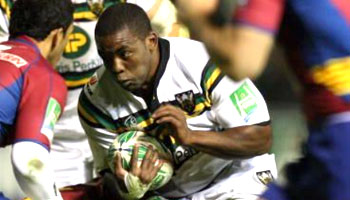 Northampton Saints prop Brian Mujati has been cited following a push on referee Nigel Owens during the Heineken Cup round 2 match against Perpignan on the weekend.

Mujati, who is from Zimbabwe but has played for the Springboks, pushed Owens in the back and now faces a possibly 6 months to life ban.

He will face an independent disciplinary hearing after Irish citing officer Murray Whyte deemed the offence worthy of further investigation, charging him with “an act contrary to good sportsmanship”.

He is set to appear in Dublin on Thursday after his push contravened Law 10.4 (l) – Acts contrary to good sportsmanship.

Owens was furious following the shove he received, and spoke to Mujati directly after play broke down with a forward pass. Saints were apparently shocked by the citing, but it looked a little unnecessary from Mujati in all honesty.

If you watch closely before it happens, the scrum breaks up and Mujati and a few others have a bit of a push and shove. He then trots over and takes it out on Owens, which obviously hurt, so you can understand him having a chat to him.