Brian O'Driscoll back from the dead, then a neat flick pass 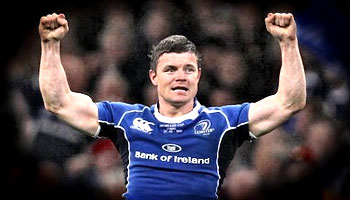 After the Magners League Grand Final a couple of weeks ago, two of the most requested moments were these pieces of magic by midfield magician Brian O’Driscoll. While Munster actually beat Leinster, there’s no doubt that these are still worth featuring.

There’s actually quite a lot that happens in this three minute long clip. As you can see at the beginning, Leinster run the ball from deep before O’Driscoll puts a kick through. In the follow up he gets badly taken out by Marcus Horan, which results in him being knocked to the floor.

While receiving medical attention, there’s a turnover, so Munster counterattack. BOD, never one to let his own personal well being come ahead of his teams, jumps up at the last second to make the tackle. Probably quite a sneaky move, but it shows the commitment of the guy.

He played on, and later in the match streaked up the left wing before delivering a pinpoint no- look flick pass to flyhalf Jonathan Sexton. As you can see, O’Driscoll touched the ball twice more in the movement, as Leinster gradually moved up field before earning a penalty.

There’s also a small cameo by European Player of the Year, Sean O’Brien, as he bumped off Ronan O’Gara in typical fashion. Unfortunately there was no proper replay at the time, but a little zoom and slow mo does the trick on this occasion.

All in all, typical O’Driscoll brilliance on show. Him getting up to make that tackle when hurt was not only courageous, but pretty funny too. Enjoy.