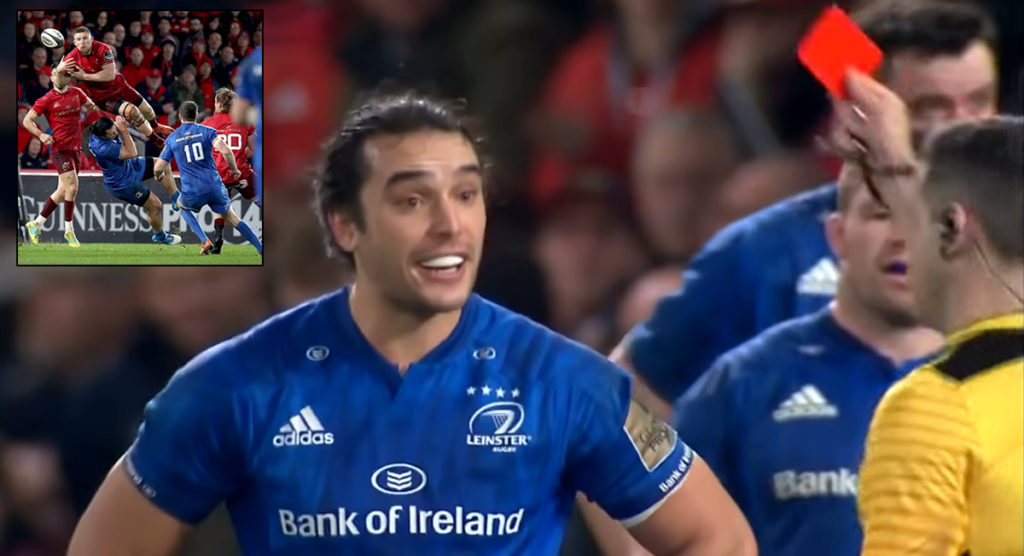 Leinster winger James Lowe has been sanctioned following the red card he received for dangerously taking Munster right wing Andrew Conway out in the air when the two sides met in the Guinness PRO14 at Thomond Park on Saturday. Lowe faced a Disciplinary Hearing via video conference today.

A Disciplinary Committee met in Neath (Wales) to consider the red-card decision against Lowe after he was shown a red card by referee Frank Murphy under Law 9.17 – A player must not tackle, charge, pull, push or grasp an opponent whose feet are off the ground.

Despite looking dismayed at the time, Lowe has accepted that he committed an act of foul play and that his actions warranted a red card.

The Disciplinary Committee concluded that the referee’s decision to issue the red card was correct, so ruled that the act of foul play warranted a low-end entry point of four weeks, which was reduced by 50 per cent due to the Kiwi winger’s clean disciplinary record and conduct throughout the process.

The Committee therefore banned Lowe for a period of two weeks meaning that he is free to play from midnight on Sunday, January 13, 2019. He has the right to appeal.

Former Ireland international Keith Wood said on the Off the Ball show that he agreed that it was a red card but said he has an element of sympathy.

Leinster legend Brian O’Driscoll also shared his thoughts on it during a discussion about the match, suggesting that players need to start learning when to pull out of these type of challenges.

“Frank Murphy (referee) got that one right for me,” he said.

“If you don’t make any effort at trying to get off the ground yourself and that happens, I think it’s an easy decision for Frank Murphy.”