Brian O’Driscoll gave a brilliant demonstration this week, outlining why Leinster’s attack is perfectly suited to open up defences. Surely Leinster can’t be stopped now Saracens have drawn their focus away from the Champions Cup?

Saracens last week named a weak team to face Racing 92 last weekend in Paris, and they lost 30-10 in a disappointing defeat.

Saracens are currently dealing with the fallout of breaking salary regulations which saw them docked 35 points.

Official table after Saracens chose to not appeal pic.twitter.com/dBXIGtAyXm

With Saracens out of the picture on the European front, it leaves Leinster with a clear run at the title in Europe, with the french sides like Racing 92 and Toulouse looking to be the Irish team’s main challengers.

On Rugby Tonight, Austin Healy and Brian O’Driscoll outlined exactly how Leinster use their backs to create space in the open field.

It really outlines the kind of threat that the team from Dublin have in their backline.

O’Driscoll spoke about how Garry Ringrose’s running lines were perfectly suited to draw in defenders, in doing so this creates more space which Leinster have perfectly capitalised on.

The lines that Ringrose runs to open up space… 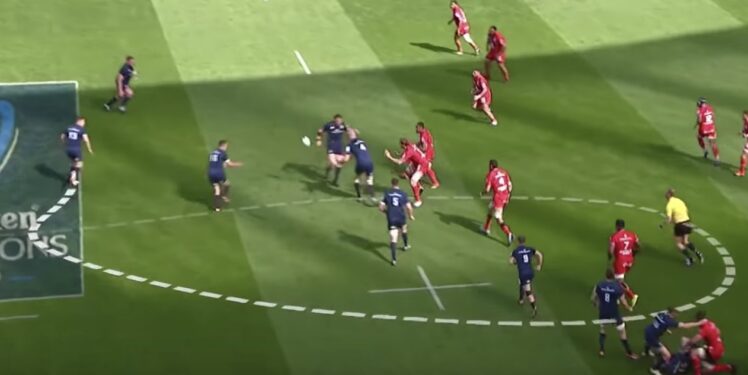 This was really brilliant from O’Driscoll and a great bit of analysis.

Leinster were the dominant team in Europe between 2009-2013 before Saracens came into the picture.

Will Leinster reclaim the title as the dominant team in Europe now that Saracens appear to have put their full attention on surviving in the English domestic league?

Here is the video of O’Driscoll explaining why they are so good at doing this, and this could be the reason why they will dominate the European tournament this year.

Teams in Leinster’s pool would do well  to watch this analysis, this really was very good by O’Driscoll and Healy.

Leinster take on Lyon tomorrow in the Champions Cup. Will they use these tactics again tomorrow?