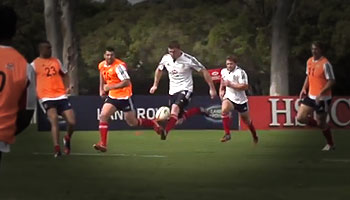 It’s tradition that after every British & Irish Lions tour a DVD comes out featuring the best of the behind the scenes footage. It’s hugely popular every time, and the latest from the 2013 tour, Lions Raw, is released in ten days time. This is a short clip from it.

The documentary comes out soon, with over 2 hours of unseen footage that is sure to be the perfect keepsake for Lions fans. The victorious 1997 tour video is a thing of legend, showing how the team bonded and trained to achieve a famous win, and this years will be no different.

Unrestricted access, covering all ten fixtures with pre-match build up and colourful halftime speeches, the crew worked tirelessly, with the cooperation of team and management, to put together what is being touted as yet another fascinating documentary.

In the short clip above, veteran Brian O’Driscoll is seen at training, nonchalantly controlling a Jonny Sexton chip over the top with his boot, then knee, then casually flicking a no-look reverse pass to Leigh Halfpenny. As you do.

In the clip he speaks about how important it is that every player in the squad plays his role, even if they’re not in the matchday 23. It’s unclear if this was at the beginning of the tour, or after he was  dropped by coach Warren Gatland for the final Test, but the message stands either way.

We’ll be giving away a few copies of the DVD, so keep an eye out for that competition in the upcoming weeks, and feel free to let us know where you think O’Driscoll – despite not being selected for the final Test – ranks amongst the all time Lions legends. Top 5?