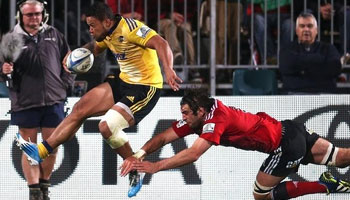 Round 7 of Super Rugby kicked off with a classic match in Christchurch, as the Crusaders hosted the Hurricanes. To avoid the spoiler we’ve kept the result out of the title, but if you keep reading you will find out exactly what happened, so cast your eyes up top for now to watch the video highlights.

It was one of the best games of the season so far, with some incredible tries being scored by both sides. The finish to the game was fitting of the standard of attacking play that we’ve come to expect from these two teams over the years.

Come the final whistle, the visitors won 29-26, scoring four tries to three and picking up just their second win of the season so far.

Alapati Leiua’s dazzling try settled the match. He beat a number of defenders with a deft outside swerve, some well timed stepping and great strength. The ‘Canes then hold on for a famous win.