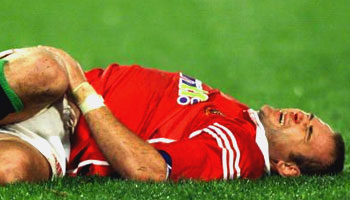 Against the NSW Waratahs on their 2001 tour of Australia, a near Test-strength Lions side took the field and won a bruising encounter, in which five yellow cards and one red were shown in a game that will forever be remembered for it’s brutality.

The match that began with a first-minute yellow card for New South Wales lock Tom Bowman boiled over early in the second half when home full-back Duncan McRae was shown the red card for his seemingly unprovoked assault on O’Gara.

In the next passage of play another fight developed among the forwards. Cameron Blades and Brendan Cannon of New South Wales, and Danny Grewcock and Phil Vickery of the Lions, were sent to the sin-bin for 10 minutes. At the time, O’Gara was still being helped from the field for stitches around a rapidly closing left eye.

At one stage in the game there were three missing from the New South Wales line-up, and the Lions two short, so the game disintegrated. But even without all the comings and goings to the sin-bin, the 10 minutes when it was 12 against 13 were, as O’Driscoll put it, “absolutely farcical”.

The game ended with a convincing 17 point margin victory for the Lions though, but the injuries and brutality they faced would be remembered for a long time.

Lions coach Graeme Henry maintained that it was “a bad day for rugby. I thought the game had been cleaned up. This was a shambles”. Henry is in no doubt who was to blame. “Rugby needs strong discipline from both sets of players. I was proud of the way our players kept theirs.”