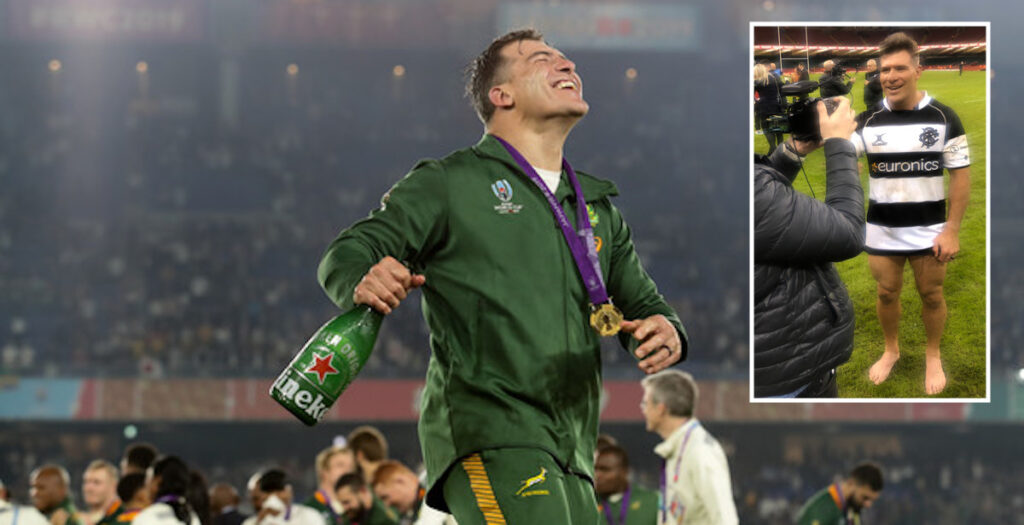 South African hooker Schalk Brits played his last ever game of professional rugby on Saturday for the Barbarians against Wales.

The 38-year-old represented his country 15 times including a guest appearance at this year’s World Cup in Japan and he also played more than 200 times for Saracens in the Premiership.

His popularity among the rugby community led to a wave of social media attention for who can only be described as a modern day legend and true gentleman.

My memory will always be of a gentleman who has time for everyone, humble, ALWAYS made me laugh, tough on the pitch, thoughtful and kind off it. Basically – blokes a f#ckin LEG-END! 💪🏼 pic.twitter.com/M16i8lmfzg

This absolute legend is retiring forever.
I asked him what has rugby given him, he simply said

“it’s given me friends and memories for life”

The picture sums him up. #PeterPan pic.twitter.com/uUJvDg0iGQ

@SchalkBrits you are the kind of Springbok everyone wants to stay forever: not only because you are so blerry good, but because you just seem like such a blerry lekker and genuine oke. Thanks for being such a great ambassador 👊🏻

The legend @SchalkBrits is retiring and I can’t think of a bigger legend on, but even more so, off the rugby field.
🇿🇦🍺👊🏻 pic.twitter.com/4lTjsfiXti

@SchalkBrits never seen a South African enjoy the Welsh anthem so much before! #topguy pic.twitter.com/bLQWxAoWFM

Goodbye for the 3rd time!😉 Congrats @SchalkBrits on a fantastic rugby career! Fantastic memories sharing the field with you bud. And now the Olympic Wresting career beckons 🤼‍♂️!

Huge congratulations to @SchalkBrits on his 17th retirement…! Was a pleasure playing with you from 1999 till 2017 on/off! No need to big you up, the stats say it all! You are a legend, never stop smiling! 😄👊🏼 pic.twitter.com/7NH13f2UJz

Congrats @SchalkBrits on a great career pal, what a privilege sharing some of it with you!!! I’ll never forget when I signed with Sarries, you were the 1st guy to call and welcome me to the club!!! #stayinthegame!!!