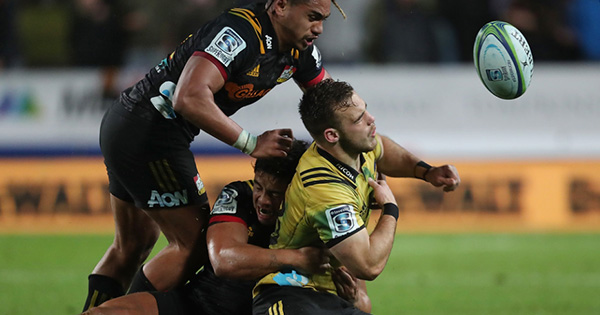 The Chiefs beat the Hurricanes 28-24 in an epic encounter on Friday night, but one negative was when centre Johnny Fa’auli smashed Hurricanes centre Wes Goosen with a nasty shoulder charge to the head. In what is becoming a recurring event for the Chiefs star, he was once again sent from the field.

Fa’auli has developed somewhat of a history when it comes to high head shots. Just last season he pleaded guilty to a similar offence committed against the Bulls, leading to a four-week suspension.

He has since been suspended for six weeks, after pleading guilty to contravening Law 9.13: A player must not tackle an opponent early, late or dangerously.

Given the nature of the hit and Fa’auli’s involvement, fans and coaches alike were brutal in their collective response. Neither did his immediate actions following the hit solicit him any favors.

The Hurricanes deleted a tweet and later apologized for calling Fa’auli a “player with a bad history of that crap.”

Hurricanes head coach Chris Boyd had this to say:

“I mean, I don’t like to see a red card in any game, but red is red, and you don’t get a more obvious red card than that. That was shoulder, no arms, straight to the head, with force, with intent. There’s no butting out of any of that. So that was a deliberate act.”

Chiefs coach Colin Cooper was also less than pleased, saying: “It’s disappointing… He’s better than that. He looks to stamp his mark defensively, but he’s got to do it within the rules, he just can’t drift up, particularly towards the head.”

Even though the Chiefs were victorious, it wasn’t enough to climb ahead of the Hurricanes who will now host the Chiefs in a quarter-final playoff matchup.

Some good news for the Chiefs is they were resting some key players – Damian McKenzie and Sam Cane – and still managed to get the win being down a man after the 63rd-minute expulsion.

While next week’s clash should carry plenty of added tension and drama, Fa’auli will not take part.