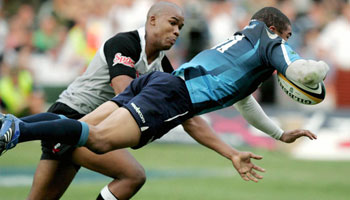 A minute or two into the game, Bulls winger Bryan Habana was lucky not to get sin-binned for a dangerous tackle on Sharks fullback Percy Montgomery. Ironically, the commentators kept saying that Habana would be booed every time he touched the ball.

It turned out that, nearly 3 minutes into injury time, Habana was on the end of a brilliant Bulls fightback. He dived over just to the right of the sticks, to give Hougaard a relatively easy shot at goal to win. They needed the conversion to win.

Despite a questionable charge from the Sharks, Hougaard remained calm and slotted it over to win.

Ndungane, Jaco van der Westhuizen, Spies, Hougaard and half-back Adams all were a big part of the multi-phase drive to the try line. Heart breaker for the Sharks.