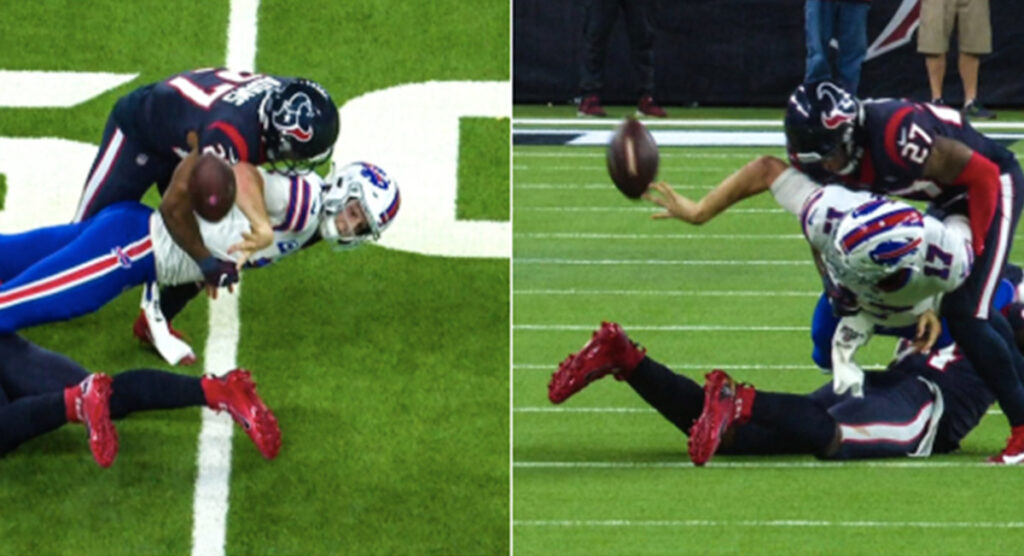 The Buffalo Bills have an enigma at Quarterback in Josh Allen. One minute he’s hurdling defenders and threading needles with insane passes. The next minute, he’s taking a 19-yard sack on 4th and 27. If none of that makes any sense to you, just know he also attempted an epic offload that would make even SBW proud.

The word “attempted” is key there. Late in his playoff debut, he was well past the first down marker after a nice run when he spun wildly and decided to offload in the tackle. Perhaps Christian Wade’s time in Buffalo is having an impact after all.

So far, so good. In fact, everything to this point looked very athletic, albeit erratic.

That’s when things went off the rails. A successful offload has to find its target. For proper examples, see here, here, here, and here. Although the run-pass option provides a potential lateral for a QB, this was something altogether different.

In this case, the offload easily cleared tight end Dawson Knox, who appeared to be just as lost as everyone watching. However, had the play worked, it would now be the stuff of legend across multiple codes.

Last Saturday’s 22-19 loss to the Houston Texans has now been added to the long list of heartbreaking Bills playoff losses.

I can’t get past that Josh Allen lateral attempt.

I’ve been preaching a little bit more rugby play in football, but that would have been seen as an idiotic offload even in rugby.

I get that Josh Allen is going to get destroyed for lateraling that ball. And rightfully so. That was insane. But if Knox catches the toss and rumbles down the sifeline it is an all-time schoolyard play. The immaculate lateral.