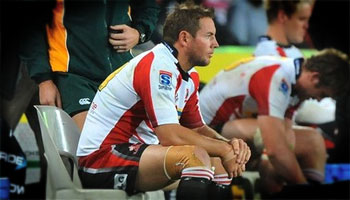 Earlier this week Lions flyhalf Butch James was suspended for four weeks for charging into a ruck dangerously against the Brumbies in Johannesburg. He was yellow carded at the time, and put on a white card, referring him to the citing commissioner.

James, Springbok World Cup winning number ten in 2007, added to his reputation of being a bit of a hot-head after he charged into a ruck during the Lions’ 34-20 loss to the Brumbies.

“The citing alleged that Butch James robustly and recklessly from some metres charged into the ruck and made contact with the Brumbies player in a defenseless crouching position contesting for ball,” said SANZAR judicial officer Mike Heron.

“The citing alleged the contact was against the head and jaw of the Brumbies player that knocked him over and he landed on the ground dazed. The contact was made at speed and James made no attempt to grasp him in any legitimate tackle or clean out.

“The contact was to the head, neck and shoulder area of the Brumbies player and was dangerous by virtue of its location, the speed and force involved and the lack of ability for the Brumbies player to prepare himself. I find that the tackle was in breach of Law 10.4(h) – A player must not charge into a ruck or maul. Charging includes any contact made without use of the arms, or without grasping that player – and do not need to look at the alternate basis for the citing (10.4(k)).”

James pleaded guilty following a review of the footage, as Heron explained in a detailed statement.

“I talked through the match footage with the player, his lawyer and, in particular Mr Ferreira the Lions technical analyst. They made legitimate points in mitigation as to the incident, including that the entry into the ruck was lawful and that James was committed by the time of the penalty.

“It was accepted, however, that the conduct did amount to foul play and through his counsel, the player expressed remorse for the incident. In the circumstances I find that the conduct was intentional and dangerous, and accordingly warrants an entry point of mid-range. The appropriate starting point in my view is five weeks’ suspension (from IRB Regulation 17 Appendix 1).

“In the circumstances I do not add any further penalty for this matter. Butch James has one previous disciplinary matter relating to a dangerous tackle from the 2011 season.

“He was suspended for four weeks as a result of a dangerous tackle that was categorised as intentional, high and dangerous. I have considered whether to add a further penalty for this previous incident, but have decided not to in the circumstances, including that the conduct is not sufficiently similar and to do so could amount to punishing the player twice.

“At the very least, the existence of this previous matter removes the ability for James to receive any discount for an otherwise good record. Matters in mitigation include the players acceptance of his wrong, his remorse for the same (expressed to me) and his plea of guilty.

“He received a yellow card, which in turn adversely impacted on the Lions during the game. The player has a long and impressive rugby record, and it was submitted that any suspension from Super Rugby at this stage in his career would have a particularly marked impact (I accept that).

“Through counsel, he was remorseful and apologetic for his conduct. To recognise and acknowledge the immediate guilty plea and remorse, I am prepared to reduce the sanction by a week, resulting in an ultimate sanction of four weeks,” Heron concluded.

James, who recently announced his retirement from Test rugby, will miss the Lions tour, and be out of all forms of rugby for four weeks, up to and including Saturday 26 May 2012.