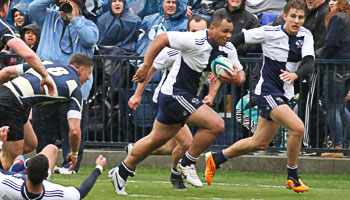 This great try comes from the (USA) Varsity Cup Semi Final and the BYU Cougar’s 60-0 drubbing of Navy in Utah on Saturday. After two great flick passes in the build up, Paul Lasike demolished the hapless Navy fullback to score from a powerful run.

Lasike joined BYU to play rugby but he soon got noticed and was actually recruited to give American Football a try. He is now a formidable running back when not playing rugby.

Having grown up in New Zealand, rugby is in his blood but being able to play both sports means he can contribute where possible, as he did in no uncertain terms at the weekend after coming on as a replacement for injured centre Jared Whippy.

Lasike was part of the move before a neat behind-the-back pass from Jonathan Linehan set up Joe Nicholls, who offloaded nicely in contact. Lasike did the rest, shrugging off the Navy fullback without any need for a fend or hand off. That’s what happens if you go high on a big guy.

George Ford, the long-serving England out-half, was kicked in the guts with Tuesday's axing but one Prem rival is still singing his praises.