Castres hooker in trouble after strike is met with theatrical dive 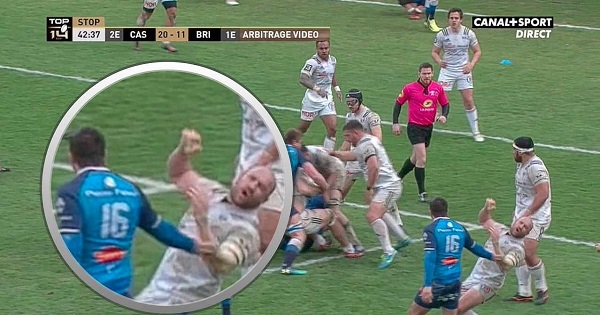 Castres’ Marc-Antoine Rallier received a yellow card for striking fellow hooker Francois da Ros during his side’s 37-28 victory over Brive last weekend. The reaction, however, was dubious as it looked like Da Ros milked it for all it’s worth.

With the home side leading 20-11 at the time following tries from Florian Vialelle and Rory Kockott, Rallier’s sin-binning could have had serious ramifications had Brive been able to capitalise.

He was struck, but there seems to have been more play-acting on the part of Da Ros, who dramatically fell to the ground clutching his face after a seemingly innocuous hit.

While former French U20 player Rallier did strike his opponent with some degree of force (in retaliation after being held), it did not appear it was of enough force to land such a damaging blow to the Briviste.

Rallier’s immediate reaction to da Ros falling to deck was of protestation and certainly the 29-year-old, in his second stint at Castres following a season with Colomiers in Pro D2, did not show much in the way of sympathy.

Castres bounced back from Rallier’s yellow card almost immediately, with Benjamin Urdapilleta slotting a penalty to extend the hosts’ lead. Two more tries, from Yohan Domenech and Alex Tulou were sandwiched by another two yellow cards, while Brive also had Félix Le Bourhis off for 10 minutes in a slightly fractious affair.

The loss for Brive continues a run of bad form at the start of 2018, meaning they lie in one of the two relegation spots in 14th, three points behind fellow stragglers Oyonnax