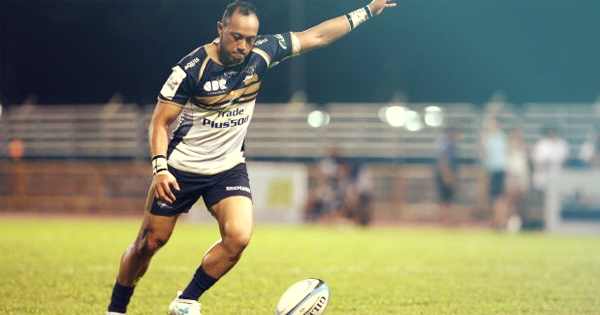 Brumbies number ten Christian Lealiifano has made an incredible return to rugby after being out of action for ten months after being diagnosed with Leukaemia. It was an emotional comeback, as he played against the Asia Pacific Dragons in Singapore.

Former Wallaby Lealiifano was diagnosed in August, and last played a competitive match in July 2016.

He had a bone marrow transplant in November and spent 100 days in hospital, before shocking everyone with his remission announcement in February. He now continues his recovery with this new milestone, playing 31 minutes during the team’s 61-14 victory.

He showed some touches of magic during his time on the pitch, and kicked five conversions.

“It was fantastic to get back onto the field and play some rugby after such a long lay-off,” Lealiifano said. “This is another step in the recovery process and it felt good to be on the field and fully involved again.

“I am concentrating totally on my recovery and my rugby at the moment and my focus is on helping the team and trying to get back to full health and my best as a rugby player.”

He acknowleged that this is just one step in the recovery process.

“My journey is very much an ongoing process and I am mindful of taking each day as it comes. The Brumbies, as an organisation, have been incredibly supportive towards me and my family and the messages I have received from players, officials and supporters have been overwhelming.

“I would like to take the opportunity to thank everybody who has supported me and sent me messages of good will since my diagnosis. I have been truly humbled by the amount of worldwide support I have received and I thank every one of you for that support.”

Brumbies forwards coach for next season, Laurie Fisher, said Lealiifano’s return is the most impressive story he’s ever seen in rugby.

“From a life threatening condition to playing professional rugby in such a short time, it’s unbelievable.”

As seen in the footage below, the playmaker’s first touch led to a try.