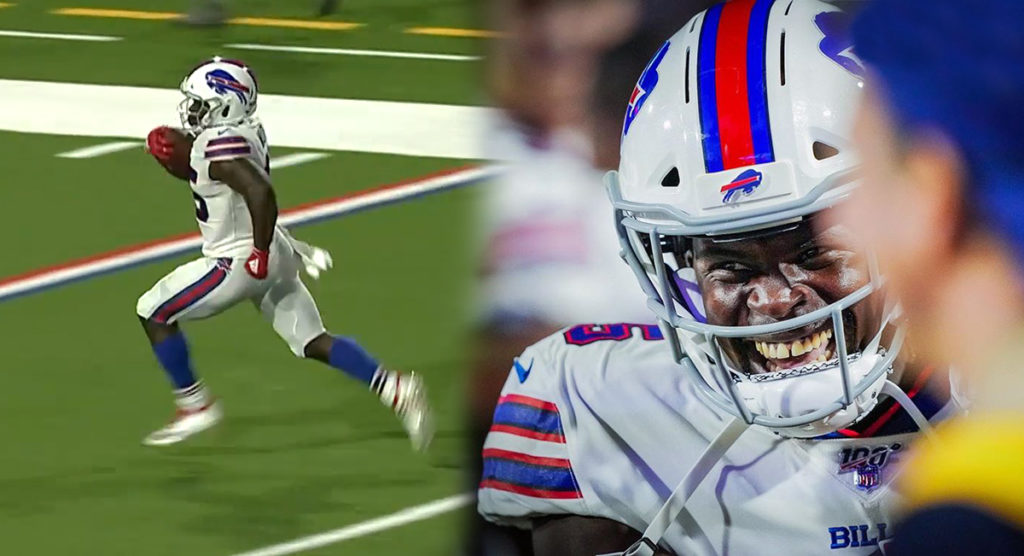 Christian Wade has had a dream start to his NFL career with his very first touch of the ball in his first ever football match. The former Wasps and England flyer went in for a 65-yard touchdown against the Indianapolis Colts, lighting up social media in the process.

With plenty of speculation over whether speedster Wade would succesfully be able to make the transtion to a fully-fledged football career or not, he’s had the dream start in a pre-season game for the Buffalo Bills, propelling himself into the hearts of fans in quite some fashion.

As the NFL described it on twitter: “In his first football game ever. On his first NFL touch. Former England rugby superstar Christian Wade just scored a 65-yard TD!!!”

What a night for the Brit! 🇬🇧 | via @nfl

Playing at running back, Wade said he knew what he needed to do even before he got the ball.

“I was off to the races and I was looking up at the screen to see if any of the linebackers or anyone was coming up behind me, because I know you’ve got the best athletes in the world here, just as fast as any running backs and wide receivers. So I was making sure I protect my tail and just tried to get to the endzone.

Asked about what he wanted to do after scoring, he said that a rugby celebration was planned but then he backed out of it.

“I had it all planned out.. I was like ‘When I get to the endzone I’m going to put the ball down like rugby’. I was thinking I might even dive like rugby, but then I thought, I could hurt myself with all these pads so as I got close, I just slowed down.

“And then I turned around because I’m so used to the conversion in rugby.. I was kind of looking around, I didn’t know what to do and everyone was celebrating and I was trying to celebrate while thinking about what am I supposed to do next and everyone was like ‘Come off the field…'”

“It was the best feeling in the world. It gives me the positive energy that I’m making strides in the right direction. I know I’ve got loads of work to do.”

Buffalo Bills quarterback Josh Allen commented after the game: “Huge congratulations to Christian Wade. Watching him score that touchdown was one of the coolest experiences of my football career, and I wasn’t even on the field.”

This is a Christian Wade fan account until further notice. 🤩

“The Bills sideline is going crazy for their friend from England!”